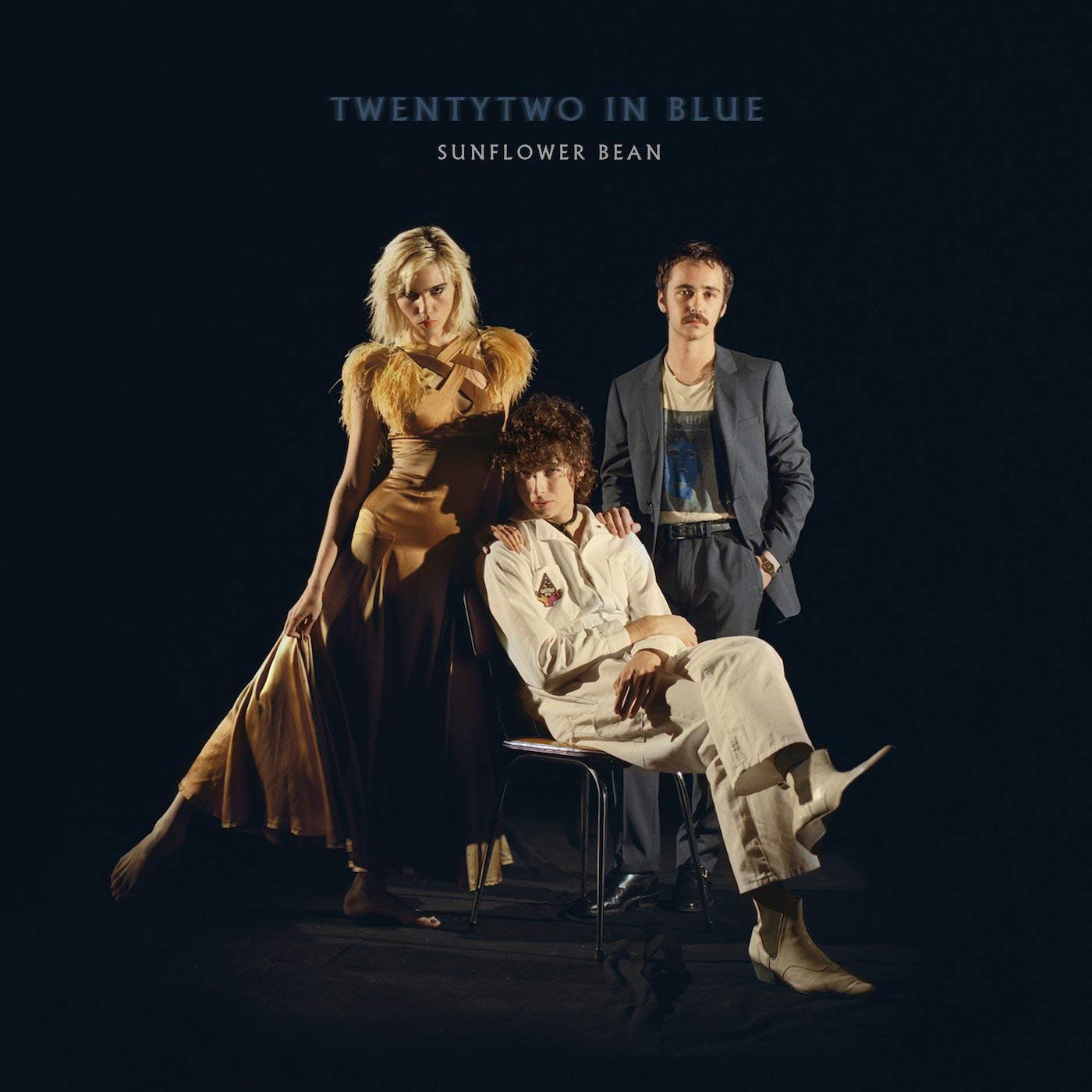 Fire Note Says: Brooklyn-based trio, Sunflower Bean, mix bubblegum and power pop, psychedelia and punk influences for a buoyant sophomore effort.
Album Review: Sunflower Beam is a traditional rock trio – bass, drums & guitar – which brings it’s original songs into focus around singer/bassist Julia Cummings’ bubblegum pop vocal tendencies from her previous band, Supercute!, a girl group that also included Rachel Trachtenburg of the Trachtenburg Family Slide Show. Based out of Brooklyn, the band’s sophomore record, Twentytwo In Blue blends Cummings’ bubblegum and power pop inclinations with the harder rock and psychedelic leanings of guitarist and 2nd vocalist Nick Kivien and drummer Jacob Faber, and the trio’s common influences that include punk, new wave and glam bands.
The album opens putting the trio’s best foot forward, on “Burn It,” where Cummings’ vocal is all punk attitude but focused by a strong melody, she and Faber lay down a strong up-tempo groove, while Kivien plays some of the most spirited lead guitar solos on the album. Later in the record, “Crisis Fest” offers up a similar vibe, with lots of female backing vocals that give it a Bangles feel, “Puppet Strings” and “Human For” find fast fun rhythms that allow the pop song energy to bubble to the surface, for energetic fun.
“I Was a Fool,” the album’s first single, finds both Cummings and Kivien trading off the lead vocal on languid pop-offering that sounds like a youthful take on Fleetwood Mac, and they offer up variations on their musical themes, trying on a variety of singer/songwriter approaches. Lyrically, Sunflower Bean either wants to “burn it down,” or proclaim their independence but in “Twentytwo” they borrow the “do not go quietly into that dark night” line from Dylan Thomas to give someone working through a youthful depression a little perspective. In “Crisis Fest” they borrow from a Bill Cosby joke to one of his children, saying he brought them into the world, and can take them out… but the music is more inspiriting than their words, which is not such a bad thing.
In the eleven tracks here, they experiment with alternatives to the pop song format, mixing in some psychedelic sounds here and there, but thankfully they find their way back time and again to the solid melodic ground where things come together, as in “Sinking Sands,” which has verses that tend to wander about, but a solid chorus hook. Sunflower Bean, which draws inspiration for it’s name from the seeds and the coffee, hits far more than misses on this sophomore album, and shows real promise.
Key Tracks: “Burn It” / “Crisis Fest” / “Human For”
Artists With Similar Fire: Dream Wife / Talking Heads / Tom Tom Club / Bangles
Sunflower Bean Website
Sunflower Bean Facebook
Mom + Pop Music