Weezer & Pixies w/ Special Guest The Wombats: North American Summer Tour 2018; Riverbend Music Center; Cincinnati, OH – Friday, July 6, 2018
As if giving alternative rock fans a gift, temperatures dropped overnight Thursday, so that after a blistering 4th of July holiday in the mid-90’s, Friday night’s weather was perfect for a night of live music at Riverbend. Add to that the wise pairing of the iconic indie rock band, the Pixies, with alt/rock hit-makers Weezer proved to be just the right mix of talents to fill the river-side outdoor shed and lawn with enthusiastic fans.
Given the double-bill headliners, both Weezer and Pixies delivered full sets, revealing the different approaches from the two heavy-hitters. Led by singer-songwriter Black Francis, the Pixies were most active and ultimately influential in the late 80s and early 90s, where the band’s hooky soft/loud verse/chorus patterns made a strong impression on Nirvana’s Kurt Cobain and many others, including Weezer. These days, the Pixies are the original trio of Francis, drummer David Lovering, and lead guitarist Joey Santiago, and bassist Paz Lenchantin, who had played in the past with Zwan, led by Billy Corgan of Smashing Pumpkins, and A Perfect Circle, led by Maynard James Keenan of Tool, who covers the parts played by original Pixies bassist Kim Deal. When the Pixies broke up the first time in 1992, Dayton-native Deal delivered a break-out hit album with her band The Breeders, “Last Splash,” and since leaving re-united Pixies in 2013, she’s been back with The Breeders.
On Friday night, the four current Pixies took the darkened, stripped back stage and roared out of the gate with the screamer, “U-Mass.” Wasting little time, one song ran into the next with the band following Francis’ lead, as they moved through “Wave of Mutilation,” delivered fast and furious, and kicked right into one of band’s college radio favorites, “Monkey Gone to Heaven,” both songs from the “Doolittle” album which came out in 1989, which found Pixies’ fans eager to dance, sing and shout along. “Gouge Away” opened with a longer instrumental groove, allowing Lenchantin to stand out as the bass line is dominant, while “Caribou” started out with a surf-rock feel, and “Bel Esprit” brought Lenchantin’s vocals in as a counterpoint to Francis’.
“Tame” again had a bass lead intro, and “Um Chagga Lagga” brought the audience back into full participation, but one of the big moments in the middle of the 21 song set, came with “Hey,” with fans shouting out the pick-up dialogue, followed by “Gigantic,” with the crowd celebrating a “big, big love.” Clearly the Pixies were eager to squeeze as many songs as they could into their allotted time. The lighting was simple, rows of lights that changed colors behind the players, but Francis led the band into the next song as soon as they were wrapping up the previous one. 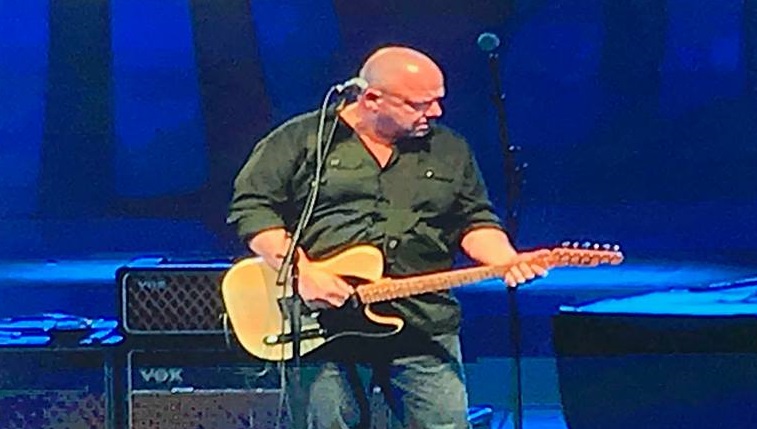 For “All the Saints,” Francis moved from his Telecaster to an acoustic guitar for the rest of the set, but the punk rock intensity did not diminish in the least. “Nimrod’s Son” started with a rhythmic shift to a sort of flamenco punk, if there is such a thing, but “Where Is My Mind?” again became a fan favorite to shout-along. While much of the set was delivered with an aggressive wall of punk sound, with most songs played at a breakneck pace, at this moment the band paused, and came together to find the right groove for what had been the Pixies biggest hit, “Here Comes Your Man,” which uniquely sounds a lot like a 60’s pop rock song by a band like the Monkees.
While Pixies seemed uninterested in playing to the conventions of “let us entertain you” showmanship, on the fun rocker “Vamos,” guitarist Santiago served up a playful solo using his hat to strum the strings of his guitar, engaging the audience and playing to the cameras that broadcast to the larger screens, which led into a replay of “Wave of Mutilation,” this time slowed down and given a surf music back beat. Over the years, Pixies have done a live cover of “Head On” by The Jesus & Mary Chain, a band who will be touring this Fall with Nine Inch Nails. For this show, they closed their show with a cover of Neil Young’s “Winterlong,” emphasizing the 50’s rock & roll vibe implicit in the original.
Pausing to greet fans, and wipe the sweat off their faces with towels, the Pixies left the stage with as little aplomb as they entered it. Veteran punks, paying little attention to the established norms of rock star/entertainers and rock show conventions, Pixies would have probably felt better in a darkened, sweaty rock club at midnight instead of as the sun was setting in a venue at an amusement park, but at this point it’s delightful to hear this great band anyway and anywhere one can. 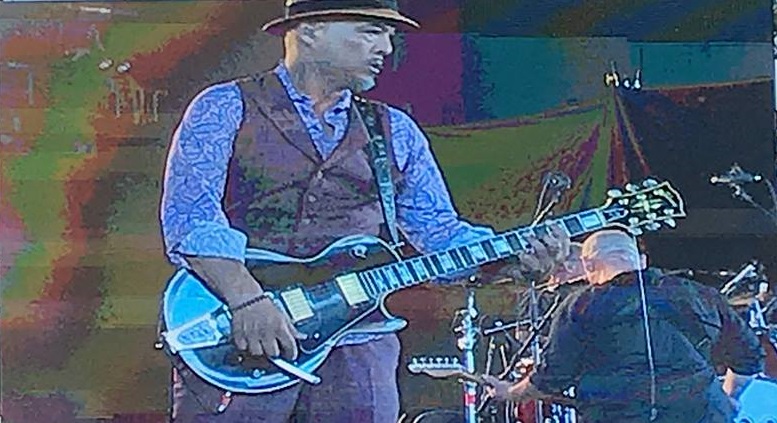 Weezer, on the other hand, took a different approach. Entering a set designed like a 50’s college rec room, Rivers Cuomo, dressed like a nerd with his tie and glasses, led the band into the “Buddy Holly,” which had fans on their feet and singing along from the get-go. Cuomo tends to keep the focus on his song’s big hooks and sing-along choruses, but he routinely steps up with a blistering, if brief, guitar solo, taking his inner Steve Vai guitar hero out for a bit of exercise here and there to remind fans he’s got the chops. And, Weezer didn’t scrimp on the special effects, kicking off the streamer cannons at the opener’s climax.
“Beverly Hills” followed, with rhythm guitarist Brian Bell adding a talk box guitar solo, that was made popular by classic rockers Peter Frampton and Joe Walsh, which utilizes a hose to carry the sound from his guitar amp into his mouth when the sound is “sung” back into his vocal mic. “Pork and Beans” followed, but the band’s first huge hit followed, “Undone – The Sweater Song,” which clearly had the crowd shouting along with Cuomo on the “lying on the floor” climax at the end of the chorus, which was followed by “Hash Pipe.” 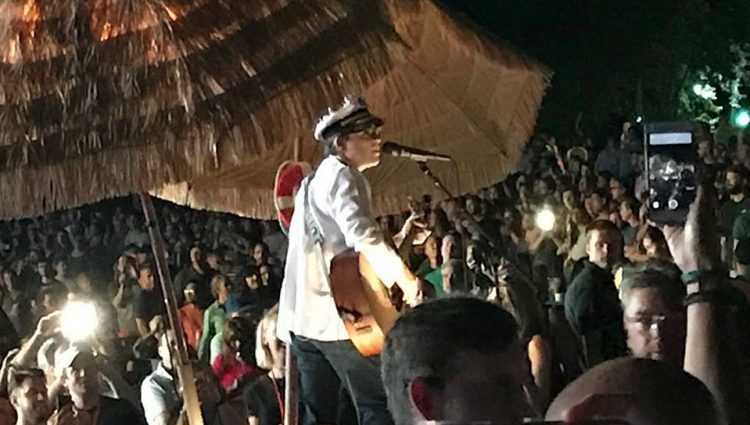 As the band moved into “Perfect Situation,” the road crew converted the stage into a garage/band practice space, including a washing machine to wash the laundry of Cuomo’s sweater & tie, as a roadie ripped off his shirt to reveal a red sports T underneath. Next came “My Name Is Jonas,” another from the band’s debut from which they played 5 songs, more than any of their other albums. “El Scorcho” led into “Susanne,” which finds Cuomo name dropping Green Day and Guns N’ Roses, which plays to his garage/cover band theme, which is put on full display in “In the Garage,” with its tip of the hat to KISS, and Cuomo tells the ultimate truth about his music: “I’ve got electric guitar/I play my stupid songs/I write these stupid words/And I love everyone.”
Wrapping up the garage segment, Cuomo introduced “Happy Together,” a cover of the 60’s song by Flo & Eddie of The Turtles. If the bulk of Weezer’s fans are too young to have an intimate relationship with this song, they certainly got the connection when it segued into “Longview” by Green Day, and back again. Then, Cuomo put on a white Ship Captain’s jacket and hat, and rode his scooter through the venue and out to the soundboard where the crew had arranged an impromptu stage with beach umbrellas, where he picked up an acoustic guitar for a solo rendition of “Island In the Sun.” Then, pleased with the audiences sing-along response, he offered up a cover of Smashing Pumpkins’ “Today,” while at other nights on the tour he’d offered up a cover of Oasis’ “Wonderwall.”
Cuomo is clearly willing to milk a bit, so he road his scooter around the rest of the sidewalks of the venue before returning to the stage, where the garage set had been replaced with the big “rock show” set with larger Weezer “W” with professional lights in and Cuomo now in rock star threads. To deliver some real rock & roll swagger, they started out with “The Good Life,” from the underappreciated classic, “Pinkerton” album, but the band could have emphasized the rock theatrics in a way to match the stage, but seemed to hold back. 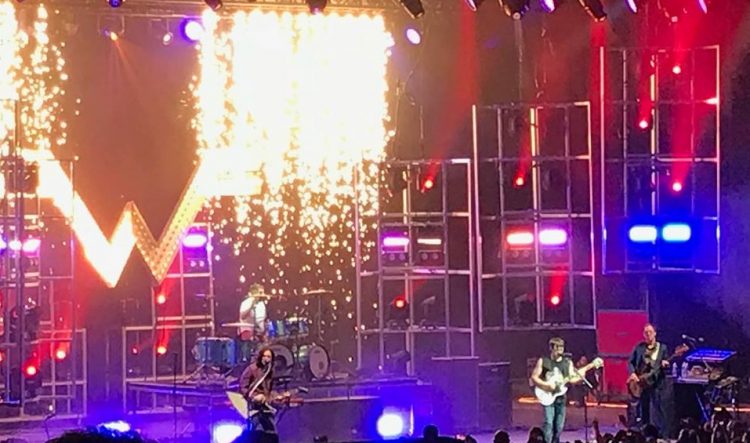 And, the song choice for what came next was a bit questionable. “Feels Like Summer,” the only song in the show from last year’s “Pacific Daydream” album, is a pop song that leans more on keyboards than guitars, so it didn’t feel like the song when you’d want to bring out your burst of fire. “Mexican Fender,” the one rocker from the latest would have been a good fit for the special effects, or they could have held back “Hash Pipe” or “Beverly Hills” to this moment, but while “Feels Like Summer” would have made for a cool and appropriate encore, it was weird to have the rock out show theatrics on that one.
But then, the moment that has on everybody’s mind, since Weezer released a cover of the band Toto’s 1982 hit, “Africa” to the Internet, which got a much bigger scream of recognition than “Feels Like Summer.” And that ended the band’s hour-long set proper. They returned to encore on two songs, the first also from “Pinkerton,” “Falling for You,” which was appearing for the first time on this summer’s tour. Cuomo almost apologized as he introduced it, explaining that it had more complicated chords, and asked his fans to give it a chance… and it was, of course, lovely. Then they closed the show with a big, rock & roll celebration on probably my favorite from Weezer, “Say It Ain’t So,” which fully lived into the stage set’s implications, when they squeezed in a reference to Black Sabbath’s “Paranoid.” That, my friends, is what Rivers Cuomo wants to be when he grows up.
The evening started with a brief, but high energy set from Liverpool indie rockers, The Wombats, playing 7 strong originals with spirit. A guitar, bass & drums trio, with all three singing harmony vocals, the band delivers songs that have a fun pop melody and edgy lyrics, and smart, danceable rhythms. “Cheetah Tongue” opened but the aggressive “Lemon to a Knife Fight” and “I Don’t Know Why I Like You But I Do,” suggest the fun, creative turns in their lyrics. Wasting little time, they punched out “Turn,” “Moving to New York,” “Greek Tragedy” and the dark but twisted “Let’s Dance to Joy Division,” a reference to the band the was the punk band that eventually birthed New Order. The song ended with the chant of “so happy” sung over the propulsive drummer’s dance beat. This is a band that left us wanting more, which is the goal of every opener.
– Review by Brian Q. Newcomb