Walter Wolfman Washington: My Future Is My Past [Album Review] 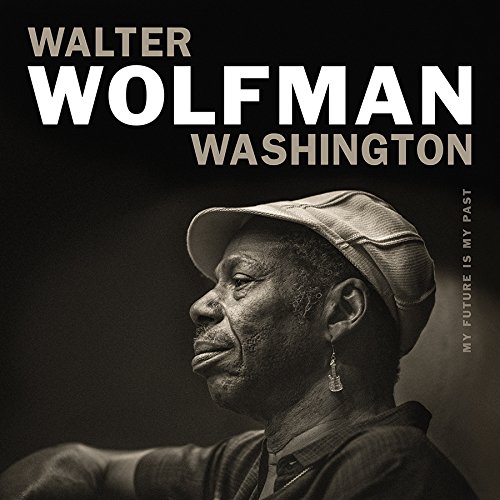 Walter Wolfman Washington
My Future Is My Past
ANTI- Records [2018]

Fire Note Says: New Orleans’ blues & jazz veteran steps away from his longtime show-band the Roadrunners for an intimate set emphasizing his inner romantic crooner.
Album Review: Walter Wolfman Washington has been a mainstay around the New Orleans music scene playing traditional blues and jazz since he joined Lee Dorsey’s band as a teenager. Washington is the nephew of two somewhat famous guitarists, Guitar Slim and Lightnin’ Slim, and has played with lots of NOLA’s brightest lights, and for the last 28 years he’s fronted The Roadmasters, and produced recordings intended to be the life of the party with titles like “Funk Is In The House” and “Doin’ the Funky Thing.” Now, at 74, Washington is ready to put another side of his musical abilities on display, with more intimate, quieter, soulful leanings and his singing voice offering up a softer baritone as he reveals his inner romantic crooner.
“My Future Is My Past” is the kind of recording you put on at the end of the party, when you want folk to settle down or even help clean up. Washington starts off playing solo, singing with only his acoustic guitar. That less-is-more approach runs through this album’s 10 tracks, even though producer Ben Ellman (of the band Galactic) has brought together a world class team in the studio, including bassist James Singleton, drummer Stanton Moore, and keyboardists Jon Cleary (Bonnie Raitt) and Ivan Neville, whose family is considered New Orleans royalty for good reason. But Ellman uses these players sparingly, embracing a minimalist approach so that there’s just enough going on musical behind Washington’s voice to support the song, and when there’s instrumentals of note, as in “Lone Ranger,” Washington’s voice and guitar soloing is interfacing with only an organ played soulfully.
In “Even Now,” Washington duets with Irma Thomas, who’s soulfulness calls forth one of his strongest vocal performances. The up-tempo traditional, “What a Difference (a Day Makes),” leans strongly on the bass, and includes a fun, playful solo from Singleton. We hear some of Washington’s electric guitar stylings on the jazzy solo rendering of “Save Your Love for Me.” “Steal Away” is the closest we get to a full band sound, thanks to the swinging rhythm section. “She’s Everything to Me,” is a slow blues love song, with only electric piano and Washington’s scattered guitar soloing, allows Washington to explore the higher notes in his bass voice register, and dig deep in his emotional delivery.
And so it goes, Walter Wolfman Washington turns it down and allows us to get close, while he puts all his soul into his vocals, on bluesy tracks with just a rollicking piano and a brief guitar solo of “Cried My Last Tear,” or on the slow, end of the night crooning to the traditional “I Just Dropped By (to Say Hello).” It’s the after party choice of the summer season.
Key Tracks: “Even Now” (duet with Irma Thomas) / “Steal Away” / “She’s Everything to Me”
Artists With Similar Fire: B.B. King / Bobby “Blue” Bland / Aaron Neville
Walter Wolfman Washington Website
Walter Wolfman Washington Facebook
ANTI- Records
– Reviewed by Brian Q. Newcomb