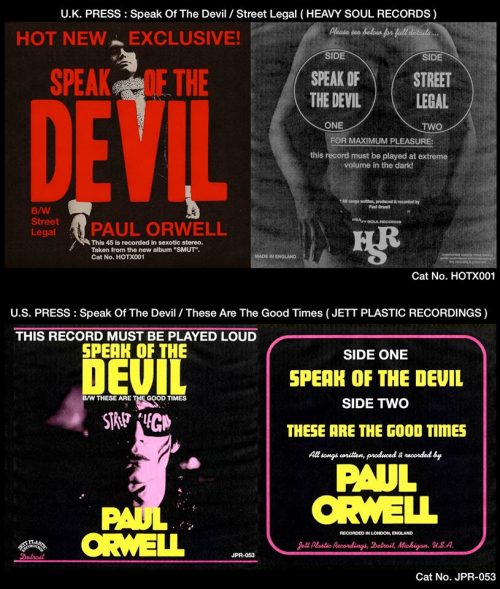 You know we like Paul Orwell and he is back with a new album, SMUT, later this year via Jett Plastic Records in the US and Heavy Soul Records in the UK. The first single, “Speak Of The Devil” is out on limited 7″ starting at 1 PM today.
The Jett Plastic version of “Speak Of The Devil” includes the b-side “These Are The Good Times”, which appears as a US exclusive B-Side. Also released by Heavy Soul Records in London, England, the UK version of “Speak Of The Devil” contains a different B-Side, “Street Legal.” Neither b-sdie will appear on Orwell’s SMUT album, which will be released much later this year.
Jett Plastic’s 7″ is a limited press of 250 copies on blood red vinyl in a glue pocket sleeve. You can pre-order HERE. They also had some copies of the UK release and a special Flexi but if they run out head over to Heavy Soul Records HERE.