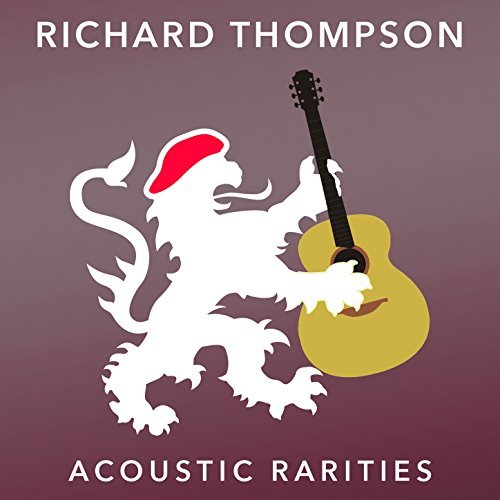 Fire Note Says: These rare acoustic tracks reveal how deep and diverse are the talents of Richard Thompson.
Album Review: Fifteen years or so back, Richard Thompson was touring solo offering up an acoustic concert, a musicological tutorial actually, titled “1000 Years of Popular Music.” It won’t surprise fans who go all the way back to his years with the Fairport Convention, which celebrated it’s 50th anniversary back in August, that some of the titles going back 9 or 10 decades in British folk music to include traditional works like “Sumer Is Icumen In,” “King Henry V’s Conquest of France,” and “Blackleg Miner.” Some better know classics appear, like “Shenandoah” and “Drinking Wine Spo-Dee-O=Dee,” but you might be amused that as he gets more current he offers up his own version of the Britney Spears hit, “Oops, I Did It Again,” and Prince’s “Kiss.” What all this points to is Thompson’s breadth of knowledge and interest, as well as his mastery of musical styles, and dexterous capacity to bring such diverse music to life on one acoustic guitar.
While Thompson is so accomplished as an electric player that when Bonnie Raitt thanked his trio for opening her concert last summer, she said that every night he inspires her band to play better to keep up with him, which no doubt led Rolling Stone to name him one of the Top 100 guitarists of all time, but the multi-talented musician is just as well beloved for his songwriting and his acoustic guitar stylings. In 2014, Acoustic Classics delivered a veritable best of collection of many of his most popular and best known songs, exhibiting his unique finger picking style and knack for unique tunings, including “Wall of Death,” “1952 Vincent Black Lightning” and “Dimming of the Day,” a song covered by Raitt. Acoustic Classics, Vol. II coming out back in August add some of Thompson’s less well known works, and with Acoustic Rarities he serves up new recordings of some of the deeper, perhaps unknown treasures in his repertoire.
There are fourteen tracks here, many exhibiting the variety of tools in Thompson’s kit, his technical skill as a player goes without saying, but he also exhibits a stunning wit, catchy melodic hooks and a broad interest in all things human, from our relationships to our attachments to objects, all of which are in display on “They Tore The Hippodrome Down,” as a gentlemen growing older grieves his long lost glory days and the changes that come. The funny, angry “What If” takes on a critic with the questions: “what if you were wrong about me all along, what if you just think you know what’s going on, what if you’re a fat man in thong, what if I’m cool and you’re deluded, what if I’m hip and you’re excluded… and you’re wrong, and you’re wrong? Ha, ha, ha, ha.” That, my friends, is an epic take down.
Quite a few tracks date back to Thompson’s work in the 70’s with the Convention and in the albums recorded with his ex-wife Linda, including the dark and mournful “End of the Rainbow,” and the similarly grim “Never Again.” “I Must Have a March” offers a fit of German folk song lore without entirely succumbing to a full polka, while his playful celebration of inventor Alexander Graham Bell, which not only reports a lot of curious facts, but delivers it in a fun jazzy 20’s feel, including some great soloing. Another example of exceptional guitar work is found in the folk ballad, “Sloth,” and throughout Thompson’s vocal delivery serves the emotional tone of his compositions and instrumentation to a tee.
We’ve been reminded all painfully of late that we don’t get to have these musical giants forever, so we have to take advantage of them when we have them. At 68, Thompson is performing at a very high level. Take “Push and Shove,” the most rock & roll thing in this collection, the playing is fast and edgy, the attitude is a bit punk, and Thompson captures the energy and passion and no small part of the ridiculousness of modern romance. For the life of me, I’m not sure why this giant isn’t as well known as Eric Clapton, or James Taylor, or whoever… but if you love high quality guitar playing, artful songs, and smart songs, get in on Richard Thompson before it’s too late.
Key Tracks: “Push and Shove” / “Sloth” / “What If”
Artists With Similar Fire: Bonnie Raitt / Bob Mould / Leo Kottke
Richard Thompson Website
Richard Thompson Facebook
Proper Records
– Reviewed by Brian Q. Newcomb

The Friday Fire Track: The Breeders – “Wait In The Car” [Video]