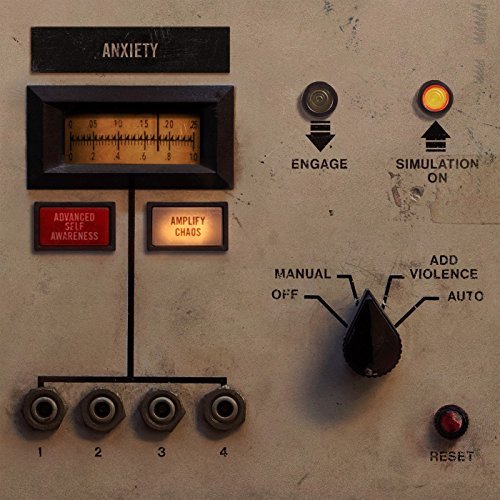 Fire Note Says: Nine Inch Nails return with the second in a trilogy of EPs, indicating that Rezner still has vital musical offerings yet to come.
Album Review: Trent Rezner had been hinting at a return of Nine Inch Nails, and just prior to last Christmas released the EP Not the Actual Events. That 5-song collection felt to many like a return to the some what more organic, hard rock sound of the band’s late 80’s introduction, aided by Dave Grohl playing drums on one track, and Jane’s Addiction guitarist Dave Navarro on another. With that release, Rezner promised a trilogy of EPs, of which Add Violence is the second offering, the final EP scheduled before the end of 2017.
Fans will remember that the band’s last full-length album, Hesitation Marks (2013), began with the 52 second “The Eater of Dreams,” which felt to headphones listeners like a hearing test (“raise the hand to match which side that you hear the beep”), and closed out with a minute and half of the aptly titled “Black Noise.” A fair share of this five-song fits into the industrial leanings that have come to dominate a fair share of Rezner’s NIN later output.
“Less Than,” the kinetic first single, opens the record, with a fast, appealing dance beat, and the closest thing here to Rezner’s pop-song instincts that first grabbed fans attention with the hook-laden, punk-influenced “Head Like a Hole.” The second so-called single, “This Isn’t the Place,” is more elusive, a sulking bass line, and some atonal piano sounds match Rezner’s haunted vocal while a buzzing bee’s nest of noise counters the melodic leanings that manage to break through.
“The Lovers” and “Not Anymore” returns to the higher energy sound loops, but the noise quotient increases as well, while the nearly 12 minutes closing track, “The Background World” succumbs to black noise (I imagine the sound of a hot lava flow with the mic turned up really loud, and the sound of a needle scraping rhythmically after the music has played on a vinyl album). All of which is to say, that Rezner and Atticus Ross, the only other, newly added NIN member, have produced new music that will no doubt appeal to long time fans, but will not likely attract listeners beyond their uniquely carved out industrial/techno/noise niche. But “Less Than” and the more commercial tracks on Not the Actual Events combine to raise hopes for a fully realized album project, at equal in appeal to The Fragile or Year Zero, and perhaps an artistic work equal in impact to that of The Downward Spiral.
Key Track: “Less Than”
Artists With Similar Fire: Ministry / Marilyn Manson / Flaming Lips
Nine Inch Nails Website
Nine Inch Nails Facebook
– Reviewed by Brian Q. Newcomb