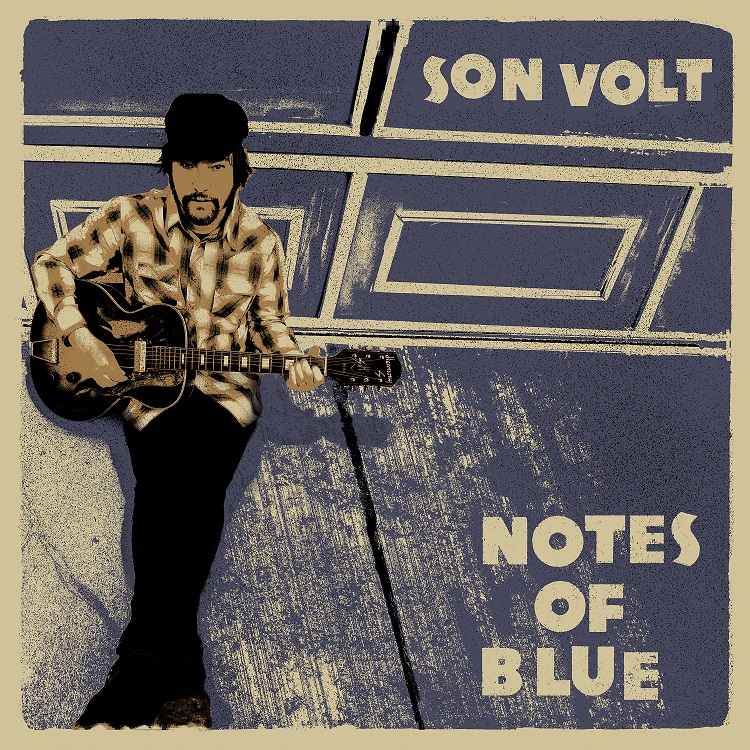 Fire Note Says: Jay Farrar employs plenty of finger-picking here that finds Son Volt rocking on song’s that capture life in the American Midwest.
Album Review: It’s been four years since the last Son Volt album, Honky Tonk (Rounder, 2013), and Jay Farrar describes his effort here as an attempt to climb inside the guitar tunings of two blues icons, Skip James and Mississippi Fred McDowell, and British folk artist Nick Drake. As such, we find Farrar approaching his songs intentionally with more finger-picking on the guitar, and after a couple of years of playing acoustic, it’s noteworthy that Notes of Blue finds Farrar returning to electric guitar and thus there’s a creative thread that goes all the way back to his earliest songs on the albums made with Uncle Tupelo.
Farrar gets that folk and blues music rise as an organic response to the vagaries of daily life among the working classes, a way of fighting monotony, a balm against despair, a reckoning of life’s ups and downs. As he sings in the album’s first single, “Back Against the Wall:” “There will be times of injustice, times when there’s more lost than found/Down times mixed with days of wonder, a real-life spinning merry-go-round.”
The songs on Notes of Blue carve a path between darkness and light while making one’s way through life, the particulars make the story poignant but the effect is universal. “The Storm,” an acoustic blues, exhibits Farrar’s finger picking as the story of loss and failure unfolds. The power in this collection of folk and blues, not unlike Okemah and the Melody of Riot (Transmit Sound/Legacy, 2005) with its recollections of Woody Guthrie, rubs up against the loud electric rocker “Lost Souls,” where the world “won’t give us the time.”
But all is not doom and gloom, even if it is always “Midnight (way down in hell),” as he sings over the strumming acoustic chords and electric slide guitar of the opening track, “Promise the World,” love can move mountains even if there is “hell to pay, light after darkness, that is the way.”

These days, most blues have become an excuse for guitar hero pyrotechnics, but you get none of that with Son Volt, as Farrar and his latest band mates – Mark Spencer (who played slide on one song on Okemah, and also plays bass and keys here), Chris Frame (guitars), Jacob Edwards (drums) – are focused mostly around playing the songs with the emphasis on the writing. (Sorry to reminisce, but it does fell like the old days back in Cicero’s Basement Bar in St. Louis’ Delmar loop when Uncle Tupelo would follow a near acoustic “Whiskey Bottle” with the rocking “Graveyard Shift,” or the runaway punk of The Stooges “I Wanna Be Your Dog.”)
As such, the quieter acoustic strains of “Cairo and Southern” exhibit one side of Farrar, played on a low-tune baritone guitar, with a haunting cadence accented by keyboard tones and pedal steel. And the big crunchy skittering rhythms of “Static” and rowdy country rockers like “Sinking Down” and “Cherokee Street” offer up the noisier side.
Notes of Blue is the 8th studio album for Farrar’s Son Volt, and according to one count, this is Farrar’s 20th album over all, including his work with Uncle Tupelo and solo records like Sebastopol and Terroir Blues, and this collection adds another fine chapter to his catalog of authentic alternative, folk, country, rock and blues. Each song is a post-card from the American Midwest and the everyday lives of folk trying to get by and make sense of a world where there’s “a man going round, taking names” who doesn’t know the meaning of the word shame (“Threads and Steel”).
Key Tracks: “Back Against the Wall” / “Promise the World” / “Lost Souls”
Artists With Similar Fire: Blood Oranges / Drive-By Truckers / Bottle Rockets