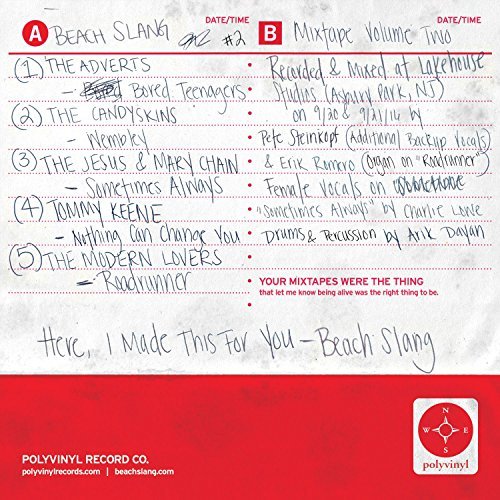 Who: After just releasing their sophomore full-length, A Loud Bash Of Teenage Feelings (2016), Beach Slang returns with the second installment of its covers mixtape series.
Sound: Replacements meets Bruce Springsteen rock from Philly on a can’t miss karaoke night!
TFN Final Take: I can never pass up a fun and solid cover record. Released on cassette, Beach Slang have just released the second installment of their mixtape series and this outing finds the band ripping through songs originally by The Jesus & Mary Chain, The Adverts, The Modern Lovers, Tommy Keene and The Candyskins.
I rarely give a super high rating for a covers record because it typically just “is what it is.” Mixtape Vol. 2 steps above that categorization as Beach Slang bring a full effort into these five selections. I also respect this release because the band did not just pick out five well known tracks that you can find multiple versions of but instead give a small lesson on just some really good alternative tracks.
To get things started you get a high-octane version of “Bored Teenagers” originally by the late 70’s English punk group The Adverts, that absolutely nails its essence. Next is the cherry on top for me, as Beach Slang tackle a 90’s alt standout song “Wembley” from another English group, The Candyskins. I have always cranked this song up and if you get a chance look up the album Fun? (1993) from the group, which I think is a keeper. The Jesus & Mary Chain are clearly a Beach Slang influence and here they cover a lower key track in “Sometimes Always,” which originally was a duet with Mazzy Star’s Hope Sandoval and now finds the band’s tour manager, Charlie Lowe, filling the big female vocal duties with ease. The last two songs succeed with an introduction to the power pop of Tommy Keene and an exciting finish with The Modern Lovers, “Roadrunner.” Is this cassette tape essential? No, but is it worth a fun roll through and will it get a big revisit when summer hits – absolutely yes!

Young Legs: The Petal And The Page [Album Review]