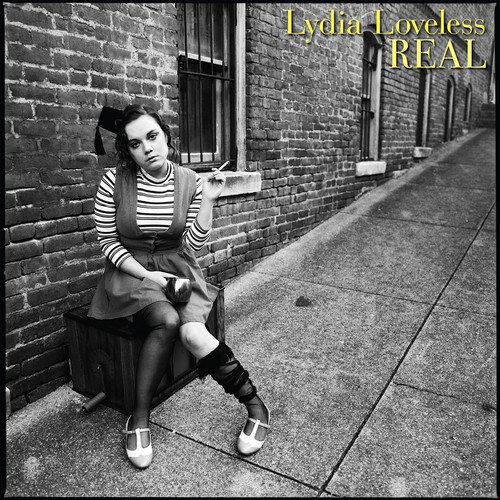 Fire Note Says: In a more polished, pop oriented release, Lydia Loveless proves she’s the real thing.
Album Review: With Real, the fourth full-length album from the Columbus OH native, Lydia Loveless continues to sing of love’s challenging foibles in rock & roll in a voice with a strong country accent. While working with producer Joe Viers and players from her live band, there still a raw vulnerability to her songs, but the sound has evolved toward a crisper, pop sheen, no doubt made more accessible for New Country radio formats that play Taylor Swift’s music to death. In fact, on might imagine that Loveless was inspired in this direction of Ryan Adams’ successful covers’ album of Swift’s 1989.
Fans of Loveless’ more raw, cow-punk leaning work, like 2014’s Somewhere Else, need not worry too much. While the sound is cleaner, more polished, Loveless is still wearing her heart on her sleeve, still risking vulnerability in her lyrics, and the guitar playing remains a potent musical foil, it’s just less noisy and her pretty singing voice is stacked more comfortably a top the instrumental tracks.
Otherwise, it’s business as usual, with Loveless belting out Liz Phair like lyrics about the challenges of love, sex, and a realistic, sustained relational connection for a strong woman with feminist inclinations and anger. That tension runs through many of these songs of desire, disappointment, and the challenges to making love go the distance. She sings, “I’d rather be lonely than ashamed,” in “Bilbao,” but later in “Clumps” she tells the man of her desires, “You make me feel alive.”

Whether consciously nor not, on tracks like “Heaven” you can hear Loveless’ pop hit aspirations, and honestly, who wouldn’t prefer hearing her voice rather than the usual teeny pop “flavor of the minute” girl singers that are competing for air time? On the first single, “Longer,” Loveless’ voice still rings with authenticity, so you can’t blame her if she’s replaced some her Lucinda Williams’ rasp with a bit more of the dreamy accessibility of Swift.
There’s still a bit of that country flair in songs like the title track, “Europeans,” and the dreamy “Out On Love.” And still a fair amount of venom in the lyrics that skewer “Midwestern Guys” who listen to Def Leppard while fantasizing about women on their knees, but in “Clumps” she deals with her own “addiction” to romance which can get in the way of a love that’s real.
Lydia Loveless is the real thing, and on “Real” she proves that real life and love are a source of endless inspiration.
Key Tracks: “Longer” / “Heaven” / “Europeans”
Artists With Similar Fire: Liz Phair / Taylor Switt / Lucinda Williams
Lydia Loveless Website
Lydia Loveless Facebook
Bloodshot Records
– Reviewed by Brian Q. Newcomb