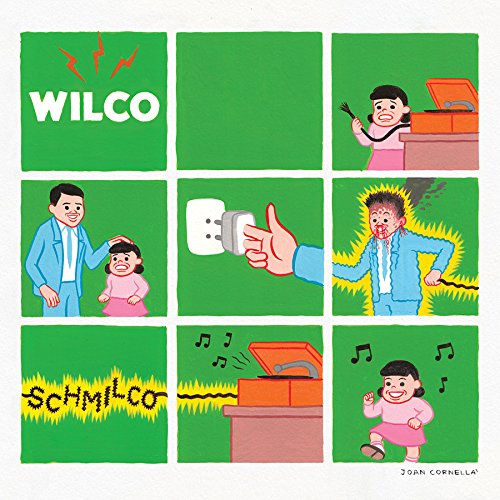 Fire Note Says: Wilco toy with their sound, defy expectations and thrill us all at the same time.
Album Review: There’s a funny thing about expectations. We the listener, what we expect out of our favorite band, we put expectations from them that we shouldn’t. Musicians are free to make the music they want to make, and we the consumers can dig it, or we can be disappointed.
So it’s inevitable when someone first hears Wilco’s latest, the title Schmilco is a nod to Harry Nilsson’s Nilsson Schmilsson, but it’s an odd title once you listen to the record as a whole. Because the first thing you notice is just how stripped down the band sound. Schmilco is a flip side to 2015’s Star Wars, a record that sounded like you were trapped in a small closet with a very loud rock band. Conversely on Schmilco, Wilco keep that same theme of insularity but this time, stick to more acoustic and toned down instrumentation.
At first, it can be a bit disappointing. It’s easy to get lazy on Schmilco and write it off as a misstep, but repeated listenings will reveal that this music is not as simple as it first sounds. It’s a record that needs your attention. It will take some time to get know this new one, like a complicated friend who says one thing but means something else entirely.
This scaled back version of Wilco is present right from the off, opener “Normal American Kids” almost sounds like a Jeff Tweedy solo project. The band is all here, of course, this is billed as a Wilco release after all, but the band announces itself in small and sly ways, a turn of guitar here, a bassline there.
“If I Ever Was a Child” pulls the curtain back to reveal all members playing on it, but it’s a layered thing. Guitars do not so much leap out but slouch in the background, filling in the holes Tweedy leaves open with his lyrics. It’s a dew eyed examination of his current sense of self, and it feels good to hear the band in such good, genuine form.
As much as I do like this record now, “Common Sense,” is directionless, there is experimentation, some noodley guitar, and percussion that sounds like slowly marching horses. Tweedy sounds spent.
On “Nope”, the slouch the band finds itself in gets funky, slinking throughout the song, there’s a druggy haze to the record not heard from since Tweedy kicked the pills on A Ghost Is Born. Only this time, Tweedy having a bit more fun.
“Always depends on the joke, won’t you let me be my punchline.” Tweedy sings. The song builds up to one of the louder tracks on the album, and it’s this subtlety that pays off with repeated listens, Schmilco’s minimalism might be its best asset.
“Someone to lose” is a surprise, just when Schmilco has convinced you that Wilco is throwing out the blueprint of the last few records, this little gem comes along, and when the chorus kicks with the electric guitars, it’s sublime, “I hope you find someone to lose, someday,” it’s a prolonged moment in the sun, on a record full of light and dark. 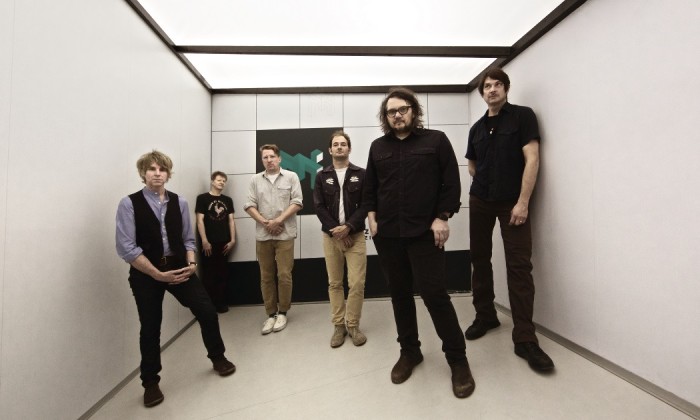 On “Happiness”, Wilco pull of the trick of sounding subdued and passionless, but hit us with a lyric that really nails the malaise that’s all over this record.
“Happiness depends on who you blame.” There’s something with this too, the moment he sings those lyrics, there’s a sound, a xylophone, that brings back the sound from 2001’s Yankee Hotel Foxtrot.
“Quarters” isn’t a misstep at all, but you might be convinced that it is if you only listened to it once. It’s the core idea that holds Schmilco together, they might sound like they are not really trying, but then they go and defy your expectations by ending the song with an open ended acoustic and string based bit of ambience, it’s a surprise that swims over us, leaving our criticism to sit in the field with them and watch the sun go down.
“Locator” is a disorienting, topsy turvy run with a simple chorus belted out at the same pace as a punk song. Wilco throw all they have at this track, loud guitars, keyboards, and odd bass lines. The song fades out after a minute or two and we are left to put the pieces back together.
On “Shrug and Destroy” Tweedy sings about being “Homeless in tennis shoes, sometimes I wish to set free, the things that still matter to me.” And if that’s not a mantra for what Wilco are trying to do on Schmilco, I don’t know what is. It doesn’t just sound like the tail end of an album, it sounds like the end of a life. “When nothing is left, rejoice.”
With all the tinkering of the band’s overall sound, one of the pluses has to be the renewed focus on Tweedy’s Lyrics, which seem more pointed and heavy than they have over the last few Wilco releases.
“Safety Girl” borrows the chorus from “We are the world” of all places. The lines come over a slight bossanova beat with synthesizers providing the levity from the last few songs on the album.
“Just say goodbye” closes out the album. “Why am I in my skin again” Tweedy sings and it’s as much of a question as it does a reason for Schmilco to exist “We try so hard, just say goodbye.”
And then it ends, and what you realize, is maybe, just maybe this is the end, that there isn’t always a long goodbye in music, or life. We only have one life, one album, 11 songs to get our point across and after those eleven songs are over, we have even more questions. And like always, the best way to answer those questions is to flip the record over and start Schmilco all over again.
Key Tracks: “Someone to Lose” / “Happiness” / “If I Ever Was a Child.”
Artists With Similar Fire: Uncle Tupelo / Band of Horses / Ryan Adams
Wilco Website
Wilco Facebook
ANTI-
– Reviewed by Adam Strong

Thrice: To Be Everywhere Is To Be Nowhere [Album Review]