Awards Banquet: If Not Now Then Summer [Album Review] 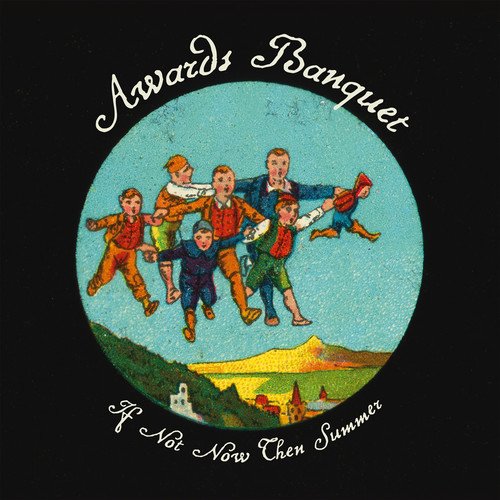 Awards Banquet
In Not Now Then Summer
Scioto Records [2016]

Fire Note Says: JP Olsen returns with his engaging Awards Banquet.
Album Review: Awards Banquet is the new band from the once Columbus, Ohio based JP Olsen, who now calls Brooklyn home. He has a list of bands on his resume that you might know that include The Beetkeepers, Burn Barrel and The Malefactors of Great Wealth. Awards Banquet’s debut If Not Now Then Summer is an interesting record as it has several different genres that gel nicely for its short 25-minute running time that are also split into a summer and winter side. The record opens with the jangly indie pop one-two punch of “The Bishop” and “Ghost Character,” which really work together as the foot tappers will have you taking notice of Awards Banquet strength that is Olsen’s witty lyrics.
“(What Have You Done To Me) Ohio” is another track that weaves a story and will pull you into its emotional base for wanting to get back to familiar territory. When Olsen sings “Athens, London and Rome, can’t you hear me calling you – oh when can I come home, cause I feel foreign now and I miss you” the listener immediately thinks back to their roots. That is the connection Olsen brings to his music.
After the piano driven ballad “Dion’s Pillow,” ends the summer side, winter kicks off with the synthesizer driven “The Deranger.” It is a complete shift in style that at first will make you check your player but gives Awards Banquet an edge you absolutely did not know they had. “Thank You Robert Kidney” is a homage to the Kent, Ohio based musician who plays with a the classic group The Numbers Band. The song possesses a pulsing beat that gives you a colder but relaxed vibe like you are sitting in a car looking out the window just watching the land rush by. It gives the feeling of isolation but the kind every one of us need every now and then. The rest of If Not Now Then Summer settles back down into a more indie pop offering that concludes with the catchy closer, “Every Sucker’s Got A Good Friend” which has a bit of spoken word dashed throughout and weirdly enough has a similar hook to “Brimful of Asha” from Cornershop, which I like.
Awards Banquet is definitely a band for fans of JP Olsen’s work. If you have been a longtime follower of his music, If Not Now Then Summer will connect as the record just oozes good vibes. Its Velvet Underground influenced pop is a real thing that uses both a minimalist approach with some electronic crossover moments to offer up a very unique and enjoyable listen. It is an album that takes several spins but once you give it a chance to sink in, If Not Now Then Summer is a breath of fresh air – warm and cold!
Key Tracks: “Ghost Character” / “(What Have You Done To Me) Ohio” / “Every Sucker’s Got A Good Friend”
Artists With Similar Fire: Chris Knox / The Modern Lovers / Cornershop