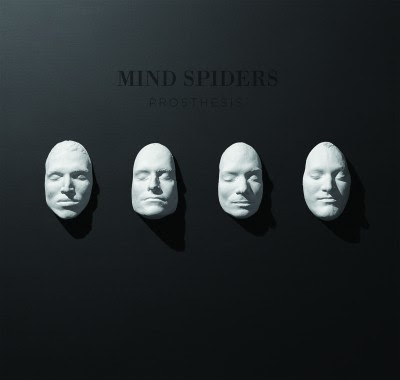 Fire Drill Album Review: I have seen so much negative talk lately about punk music it makes me tired. The question has come up time and time again – has punk music influenced anything? Is there any substance to most punk music? Punk just all sounds the same? For all those people throwing out the question – I have one for them. Have they checked out Mark Ryan (Marked Men, Radioactivity, High Tension Wires), Daniel Fried (Bad Sports, Radioactivity, Video, High Tension Wires), Mike Throneberry (Marked Men) and Peter Salisbury’s (Baptist Generals/Sub Pop Records), band Mind Spiders?
My guess is they have not, as this group is now on their fourth full length in the last five years and their music just keeps getting tighter and more progressive. Prosthesis still is a punk record at heart but its synth pulse, distant vocals and driving guitars feel like something else – something different, something familiar and something that will rock your head off!
With all the tracks, minus one, hitting the three and four-minute mark, Mind Spiders weave their sonic web all around you with a beat that is hard to turn down. When Ryan exclaims, “we like that kind of desperation, babe” on “No Filter,” right before the guitar viciously see-saws back n’ forth – it gives you a good feeling edge that never ceases. This is the way the full 28-minute Prosthesis plays out, which makes it a really easy record to come back to for more. Who cares what the super critics say – punk still lives and it feels fresher than ever before in the Mind Spiders hands.