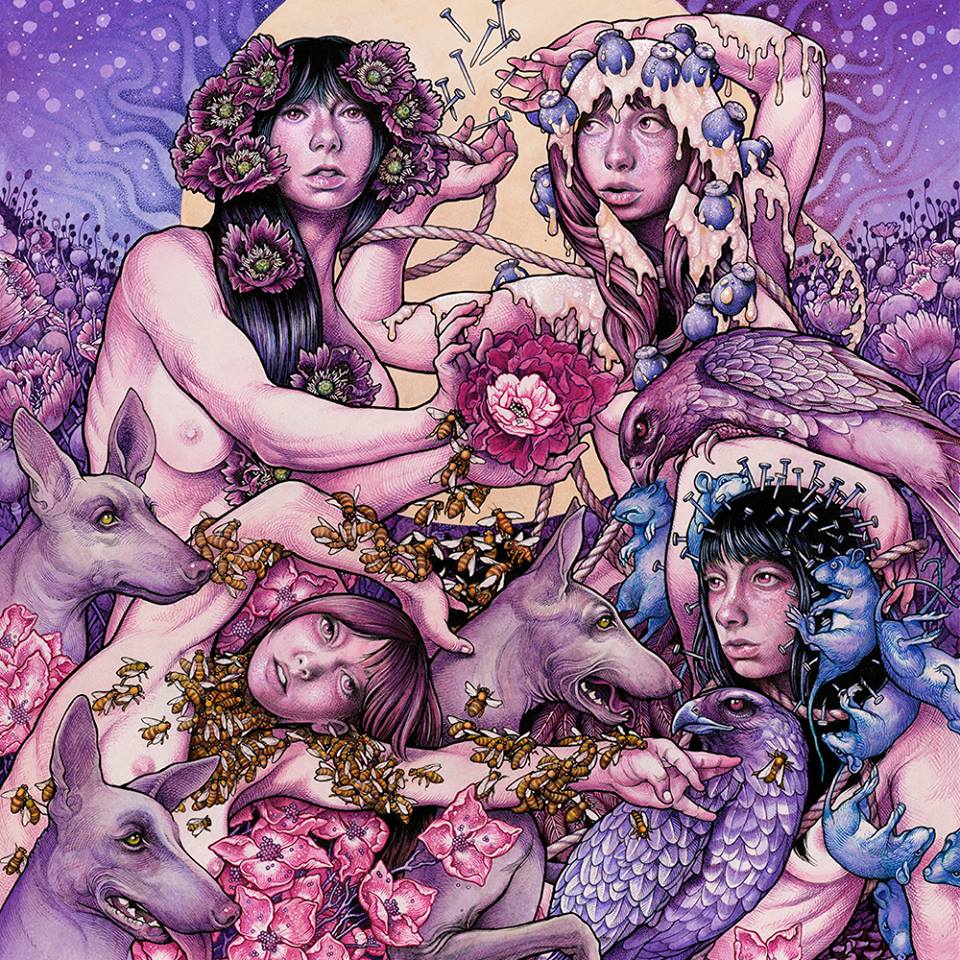 Fire Note Says: Baroness is back stronger than ever!
Album Review: You can talk about indie genres and bands all you want but when it comes down to it, all of us love a really good rock record from a bona fide rock band. Baroness is exactly that kind of band and Purple is definitely that kind of record. The groups last album, 2012’s Yellow & Green, was a beast as the double album ran 75 minutes long and made several shifts in their metal with multiple melodic melodies and low volume chords. When you combine this stylistic move with a horrendous near death tour bus accident that happened just a month after Yellow & Green’s release, it should not be any surprise that Baroness in 2015 is not the same band. Purple represents a restart for the group as it is the first record recorded with the lineup after the accident and a chance to channel all of those feelings into one concise package.
The best part of Purple is that the band has taken the harder edge elements of their past and swirled it with the smoother waves of Yellow & Green. It gives you songs like the opening “Morningstar,” that explode with a huge riff right up front and then lets singer John Dyer Baizley walk you through the song with his powerful chops. A great voice and great guitar turns out a fierce track without ever feeling like it goes over the top as it sonically rips you from the inside – especially when the huge back n forth riff closes the track down. You then get propelled into “Shock Me,” which just starts off with simple key work for 30 seconds before the drums and guitar start drilling down. The song then has one of the biggest choruses the band has released.
The rest of the record follows this sort of pattern but is still unpredictable with the short instrumental “Fugue,” the epic almost 7-minute single “Chlorine & Wine” and the climatic “If I Have To Wake Up (Would You Stop The Rain)” which keeps Baizley’s vocals somewhat hidden as the band rises up their instruments around and over him. When you end this 43-minute workout, you know that you just heard a record that will consistently play great every time you put it on. Purple has the pulse of survival after all that Baroness has been through, both physically and mentally, as each track has its point of excellence. This bigger than life sound will suck you in and Baroness will remind you of why a really good rock record is all you need!
Key Tracks: “Shock Me” / “Chlorine & Wine” / “If I Have To Wake Up (Would You Stop The Rain)”
Artists With Similar Fire: Black Sabbath / Kyuss / Torche