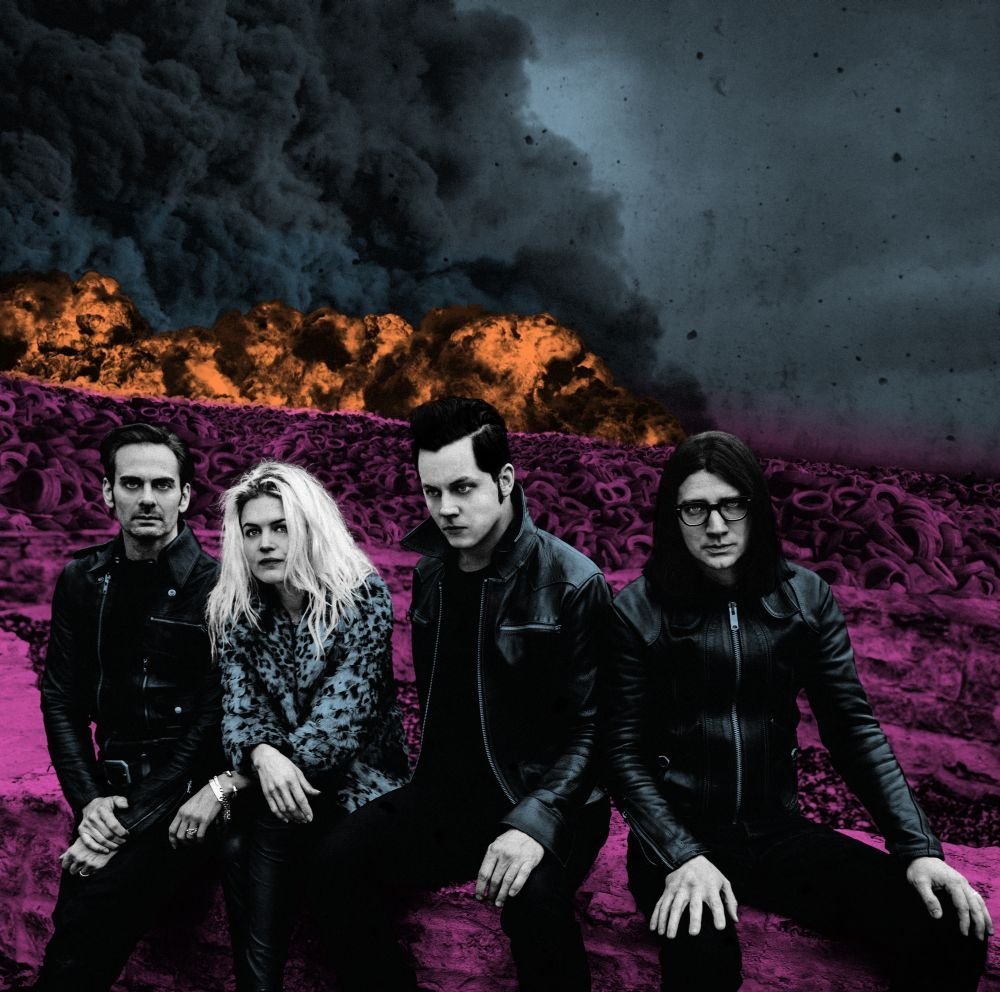 Fire Note Says: The Dead Weather storm back into play with the fun and scuzzy Dodge And Burn.
Album Review: I have to get something off my chest. Jack White’s last album, Lazaretto was not a 4 headphone record. With a handful of good tracks, it felt under developed when compared to his solo debut, Blunderbuss. Saying that, I might be able to say the same thing about The Dead Weather’s new album, Dodge And Burn. The Dead Weather is Jack White’s “side project” consisting of Alison Mosshart (The Kills), Jack Lawrence (The Greenhornes, The Raconteurs), and Dean Fertita (Queens of the Stone Age). Why is the side project in quotes? Dodge And Burn just so happens to be The Dead Weather’s third album with Sea of Cowards dropping in 2010, and Horehound coming before that in 2009.
Jack White and his moody, leather clad misfits have taken an interesting stance ever since their debut in 2009. Using an electro-velcro, scuzzy-fuzz, swampy, gothic blues sound The Dead Weather then fills that mold with violence, sex appeal, and swagger-not a bad formula considering The Dead Weather pulls it off. With “I Feel Love (Every Million Miles)” The Dead Weather remind us why we missed them after 5 years. Fertita’s barbwire riffs sting the ears while Mosshart’s drifter character belts “I feel love every million miles/I feel love every once in a while.” “Buzzkill(er)” is a moody slink that’s penetrated by a six sting power drill. “Three Dollar Hat” has to be one of the most interesting Dead Weather songs conceived with atmosphere, tempo changes, as well as mood changes-it’s the shadowy stranger that goes in for the kill.

My biggest complaint to lodge against Dodge And Burn would be the same that could be said for some movie trailers. A lot of the good scenes where shown before the movie ever hit theaters. Yes, we’ve know about this album since the end of 2013 but through songs being released online and through the Third Man Record Vault it diminished the impact. “Open Up (That’s Enough),” “Rough Detective,” “Buzzkill(er),” “I Feel Love (Every Million Miles),” and Too Bad” were all released before the final albums release date. It’s great that the attitude has always been there since Horehound day one. However, for Dodge And Burn it didn’t inspire innovation either.
To sum up The Dead Weather’s Dodge And Burn, it’s a fun 50/50 album with impressive percussion by White, sexy production values, and middling hooks. It fits a consistent formula that’s always fun. When compared to White – The Dead Weather’s catalogue holds value. Is it essential? You could do worse!
Key Tracks: “I Feel Love (Every Million Miles)”, “Rough Detective”, “Cop And Go”
Artists With Similar Fire: The Black Belles / Band of Skulls / Black Rebel Motorcycle Club