Last year, Polyvinyl Records had the cool idea to send around a Tascam 4-Track cassette recorder and capture some unique artists’ recordings with this simple setup. Polyvinyl then released the output as a monthly 7-inch series. Some of the highlights from the 2014 series included 7-inches from Cloud Nothings, Mikal Cronin and Thao & the Get Down Stay Down. Well, the 2015 series has already had a strong start with offerings from Crooked Fingers and Deerhoof as the May edition brings 2 new tracks from of Montreal.

The A-side, “Pariah Conscience,” is a surprising mid-tempo rocker from Kevin Barnes with its strong pounding skins that would actually fit on a nice garage compilation with the likes of King Tuff and Ty Segall. It is a side that I have not heard from of Montreal in some time and once again just highlights the many talents of Barnes. The B-side here, “Windowsucking,” is much more what I would expect with this release from of Montreal. It lets the weird out, as its quiet strumming sets you up thinking a 4-track acoustic number until the shaking psychedelic reverbish vocals carry throughout the just over 2 minute track. 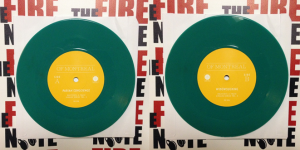 The packaging on volume 2 has been much more colorful as the sturdy cardboard jacket comes with similar abstract cover artwork while the back is much more business-like with the track list. The vinyl color for this series has also moved away from the Volume 1 clear to different selections of color and the May Edition is the pictured solid green. The subscription to the series is limited to 1000 memberships and includes a custom designed box for the twelve 7″s. They also each come with a download. The series is still available HERE so if interested – go for it as the next months will bring new material from Kishi Bashi, David Bazan, Ducktails (Real Estate) and The Dodos.
-Feature by Christopher Anthony