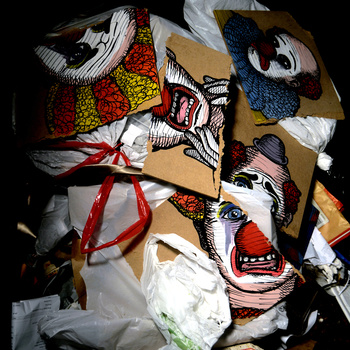 Pile
You’re Better Than This
Exploding In Sound Records [2015]

Fire Note Says: Pile’s third LP continues their trend of incredible releases, and this time they have out done themselves. This is album of the year material.
Album Review: Once upon a time, I heard a disjointed, but oddly intriguing LP, Pavement’s Slanted and Enchanted. I remember not knowing what to make of it back in 1992. I knew it was good, but it took a few listens to discover that it was a thing a beauty. I felt the same thing listening to You’re Better Than This. It feels all over the place at first. However, with each listen, there are revelations and eventually the music sorts itself out revealing a methodically crafted piece of art. Once you achieve that clarity, you know you have stumbled onto a masterpiece.
You’re Better Than This is a bona fide; you need to own this, masterpiece.
Pile, a quartet from Boston, continues their motif of precision guitar attacks and disjointed arrangements on their third release. They have that “loud-quiet-loud” Pixies vibe, which features Rick Maguire’s sometimes-languid vocals that can turn on dime and become guttural, roars of rage and anguish. He has a range that can evoke a folky Jeff Mangum and then shift into berserk David Yow territory.
Pile have carved a sound out of multiple influences and made something unique. Reminds me of bands like Jesus Lizard mixed with the Pixies; wonderful soft moments that make their outburst of fury that much more intense and brutal. All ten tracks are all excellent. There is zero filler here.
Most tracks on You’re Better Than This feel dangerous and a bit demented. Opening track, “The World is Your Motel” injects you immediately into the world of Pile with a frantic, dynamic, and pummeling assault of guitars and pounding drums.

“Mr. Fish” slows things down for a minute or two before building to a dizzying crescendo before slowing down again. Loud-quiet-loud indeed.
“Tin Foil Hat” stings you with barbs of venomous noise that linger with you long after the swelling and song has gone.
“Fuck the Police” is ironically their most subdued track on the LP. I braced for something corrosive when I read the track names, but got a welcoming ramshackle style instrumental number.
Pile disregards conventional approaches to song structure.”#2 Hit Single” makes that blatantly clear. Power riffs and guitar squelch start you off and shifts about 5 more times during the song’s 2:45 running. This tracks seethes of menace and is abrasive, but you cannot turn it off. Compelling stuff.
Pile’s discography is immensely entertaining and they are getting better with age. You’re Better Than This should end up on many rock critics’ Best Of 2015 lists. Pile give me hope for this generation of indie rockers. They are innovative and are a refreshing reminder that rock music has something to say and can say it in a way that you have not quite heard yet. 10 years from now, new indie bands will be name dropping Pile as their main influence.
Key Tracks: “The World is Your Motel” / “#2 Hit Single” / “Tin Foil Hat”
Artists With Similar Fire: Pixies / Jesus Lizard / Pissed Jeans