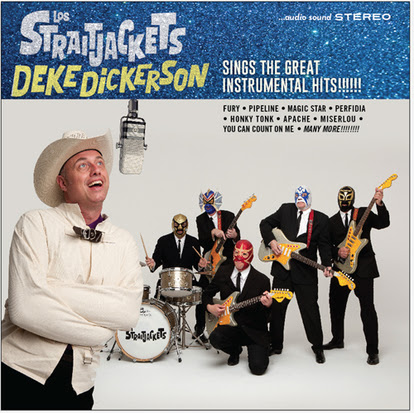 Fire Note Says: Los Straitjackets find the words to some of your instrumental favorites.
Album Review: Just when you thought you have heard it all, the instrumental combo team of Los Straitjackets have something fresh for their genre. They have teamed up with roots-music legend Deke Dickerson to breathe life into this collection of fourteen famous instrumental hits with their lost original lyrics. Now the Straitjackets have been down a similar road in the past with Sing Along with los Straitjackets (2001) and Rock en Español, Vol. 1 (2007) where they brought vocalists into the mix but Sings The Instrumental Hits lets Deke do his thing all on his own.
This is one of those records you just play and see what happens. For fans of the instrumental genre this is an interesting ride because my guess is you have never heard or seen any of these lyrics. With classics like “Miserlou”, “Walk Don’t Run”, and “You Can Count on Me” (which in instrumental form was the theme song to Hawaii Five-0) there are plenty of songs that newbies will recognize. Other songs, such as “Kawanga” are Straitjackets originals that date back 15 years. It now has a fresh coat of paint with the pogo Deke vocals now giving the song a spring in its step. Another track you may not know is “Apache” which was made famous by the British band The Shadows in 1960. Now with lyrics the song sways and moves as Deke croons and the Straitjackets give it their modern flare. It also pays tribute to the Incredible Bongo Band’s 1973 version which found its middle percussion break sampled countless times and here has Deke grooving to the beat. 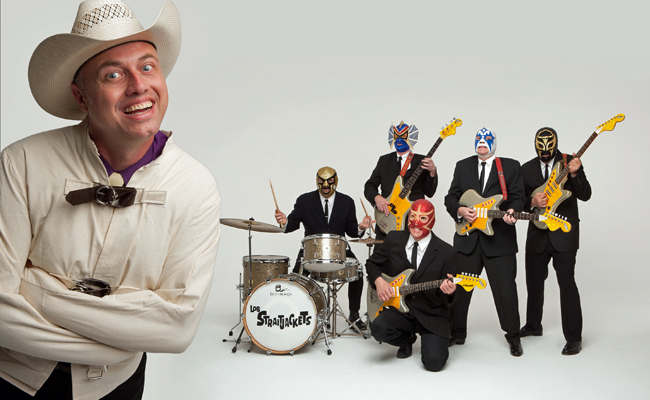 Los Straitjackets: Deke Dickerson Sings The Instrumental Hits will not be for every pallet because if you are not into the surf thing these tracks probably still won’t appeal, even though they now have lyrics. That being said, there is plenty here for new listeners to find but this release is really for the Straitjackets and Deke fans because the pairing totally works. The songs are tight, fun and well planned out as the record takes you back to a different era. It is a retro vibe all the way through and if Mad Men is your thing, Sings The Instrumental Hits is overflowing with hipster credibility and swagger!
Key Tracks: “Kawanga” / “Apache” / “Popcorn”
Artists With Similar Fire: The Trashman / The Shadows / Man Or Astro-Man?