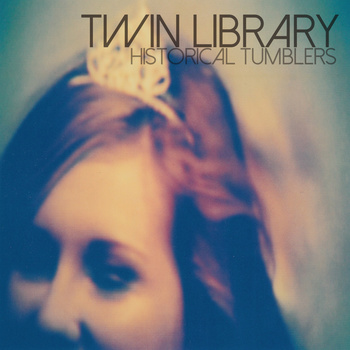 Fire Note Says: Historical Tumblers’ grand ambitions flash by with punk-like pacing.
Album Review: Twin Library’s bio suggests that you may enjoy them if you also like Guided by Voices, and there are two main reasons I can see for this line of thinking: the band is prolific (having released ten albums in the last six years), and their songs are pretty short. Not that Historical Tumblers is filled with snippets and one-verse songs—these are full-fledged tunes, but at an average length hovering just above the two-minute mark, ten of them go by in less than twenty-four minutes, meaning this album feels more like a long EP than an LP. So is Historical Tumblers economically concise, or is it too short for its own good?
Luckily, it skews toward the former. The band’s hazy mix of reverbed guitars, laid-back vocals, and insistent drum beat is the kind of thing one could stretch out a bit longer, but the songs are probably better off for their brevity—they’re long enough to feel finished without being so long you get sick of them. The band’s sound is comparable to other current acts mining the sounds of 60s and 70s folk-inflected rock (The War on Drugs, The Donkeys, Father John Misty) with a bit of arty post-punk experimentalism thrown in to give the album a more “atmospheric” texture. Fragments of dialogue and other found sounds occasionally emerge from the fog, interspersed between a few of the tracks and making the album feel unified, even if the message that’s being sent through those fragments is just as murky as the guitar tone. Sometimes, despite the short running times, things can get a bit monotonous, like the straightforward groove of “Kick It Apart” or the acoustic strum intro passage on “Cruel Rodeo.” Thankfully, such moments are—like the songs themselves—short lived, and “Cruel Rodeo” does develop into a catchy uptempo number once it gets going. Highlights include opener “The Southpaw Boys,” with its crunchy guitar riff and subtle brass touches, as well as the breezy, late-summer vibe of “Warmer Skeletons” and the punchy, slow-build dynamics of “Right Around the Wrong Time.” Closer “The Strangest House” brings the album to its finish with majestic, descending minor chords and screeches of feedback that fade out about half way through, leaving ghostly, whispering vocals and guitar floating off into the ether.
Historical Tumblers is ultimately one of those albums that’s hard to pin down—it’s quickly paced and smartly sequenced, and the songs hold together well. At the same time, that quick pace means that things can feel a bit tossed-off, and while most of the tracks feel finished there are times when the album feels like a dry-run compiled from song sketches. Overall, though, it works, and it will be interesting to see how the band approaches their next album—if the past is any indication, we won’t have to wait long to find out.
Key Tracks: “Warmer Skeletons”, “Cruel Rodeo”, “Right Around the Wrong Time”
Artists With Similar Fire: The Donkeys / Chad Vangaalen / Skygreen Leopards