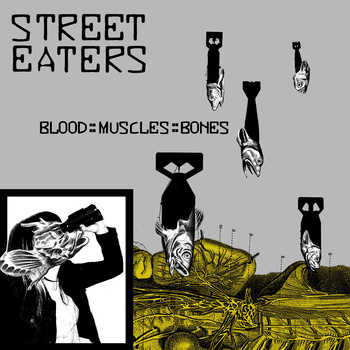 Fire Note Says: Street Eaters newest LP is a buzz/fuzz rock veritable smorgasbord of sound and attitude.
Album Review: I had not heard of Street Eaters until a few weeks ago when I received Blood//Muscles//Bones for a review. I have to say I am pleasantly surprised and impressed with their sound. The best comparison I can come up with to sum up their sound is Jeff the Brotherhood if they formed a super group with L7. Sounds like a lot of rock? Well, it is.
It is hard to believe the wall of sound generated from Street Eaters new LP comes from a duo. The Berkeley-based band is just Megan March on drums and John No plays guitar. Both contribute in the singing department. The music has so much meat on its bones. It really sounds like four or five musicians are creating this delightful cacophony.
The 10-track Blood//Muscles//Bones starts with a bang. “Reverse” opens with a reversed recording before blasting into a tight mid-tempo scorcher. Street Eaters have some serious attitude and it comes across loud and clear in their opening track and throughout the entire album. 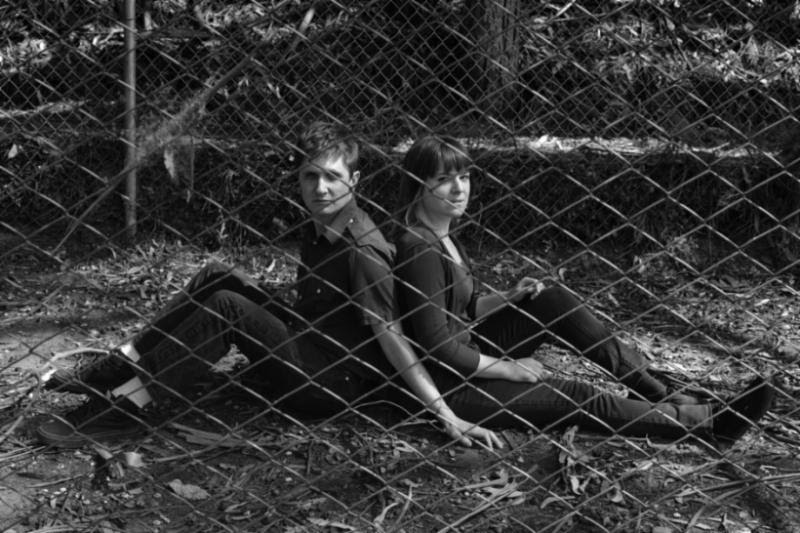 Things do not slow down on track 2 or 3. “Null” and title track “Blood//Muscles//Bones” are snarling, ferocious numbers with a lot of shifts and crunchy riffs. Street Eaters do not settle for just one or two guitar hook per song and repeat them ad nauseam; they throw many ideas into each track. Moreover, these ideas work for them and the listener.
We get to catch our breath on “Dead Parts.” Megan’s vocals soar above a cloud of guitar fuzz and noise for the first part as the song gives way to a duet of sorts between her and John. It is messy, but controlled.
The slow build-up of “Tailings” compliments the boisterous and oh-so-jamming mid-section. “Empty Rooms” starts with a heavy and ponderous riff and then switches gears into punkish frenetic energy. Two other stellar tracks, “West” and “Running Dog” round out a very tight album that does not have any dull tracks/filler.
If you enjoy energetic, crunchy rock in the vein of Jeff the Brotherhood with angry boy/girl vocals then give Street Eaters a chance. Their bravado and rough rock sound should win them many fans.
Key Tracks: “Reverse” / “Null” / “Empty Rooms”
Artists With Similar Fire: Jeff the Brotherhood / L7 / Beloved Binge