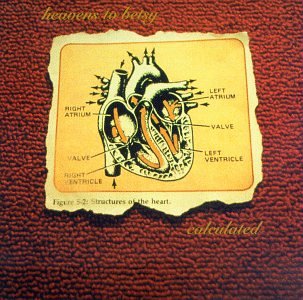 Fire Note Says: Heavens To Betsy‘s anger couldn‘t be more captivating on Calculated.
Album Review: When people hear the name Corin Tucker they should get excited—if they don’t, shame on them. A prominent figure in music from the 90’s through today, Corin Tucker has made her waves with Sleater-Kinney, Cadallaca, The Corin Tucker Band, and most recently super-Earth featuring R.E.M.’s Peter Buck and Nirvana’s Krist Novoselic. But what helped give her a push in the first place? Heavens To Betsy. That duo consists of Tucker(guitar, vocals) and Tracy Sawyer (Drums, bass) part of the DIY riot grrrl movement in the punk rock underground in the early 1990s. Their label Kill Rock Stars was gracious enough to reissue their only LP and rugged classic Calculated for Record Store Day 2014.
While I hear the riot grrrl influences, I like to think that Calculated has an interesting character that allows it to be something more. While “Nothing Can Stop Me” and it’s heartily, ravenous “fuck you” backing could easily drag your attention in, I found that the title track, “Calculated,” carries the exact grit, scum, and slime that seethe through Tucker on the entire album. Your blood runs cold as Tucker sings, “I got a knife that is sharpened/exactly for one white boy/my target is your heart/and the knife will go deep inside.” What makes this RSD reissue equally impressive is the girth of sound punched through the speakers. Favorite, “Axemen” has Tucker transforming from a docile church mouse to a grinding fire-breather that could make Sleater-Kinney sound tame. “Donating My Body To Science,” another highlight, employs a rising and falling drone that manages to uplift and depress in a four-minute span.

Calculated keeps delivering satisfaction as the wax is left to spin. “Terrorist” houses more primal aggression when Tucker sings “I’m going to kill you,” and the longest track, “Complicated” (easily another highlight), is the closest thing to a Betsy ballad that you’ll get. It really recalls that heart-wrenching 90’s vibe taking a cue from Billy Corgan when his vocals and guitars float at their most empty. That last phrase is what makes Heavens To Betsy’s Calculated so appealing: it’s emptiness with substance. Tucker and Sawyer play from the bottom and seethe through the top of this record. These girls aren’t being bitchy or feeling sorry for themselves; they’re just playing some fucking rock n’ roll with conviction. The good news is that while it was released as a Record Store Day exclusive, with 1000 pressed, Kill Rock Stars understands their fans and has turned Calculated into a colored, mail-order exclusive to subvert flippers. Never have two girls sounded more ferocious. Do your self a favor and bring on the Betsy!
Key Tracks: “Decide” / “Axemen” / “Donating My Body To Science”
Artists With Similar Fire: Skating Polly / Bratmobile / Excuse 17