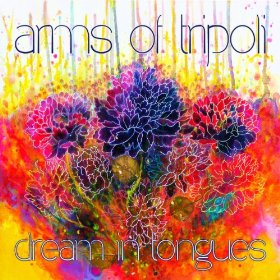 Fire Note Says: Sonic architects Arms of Tripoli encompass many emotions with Dream In Tongues
Album Review: Right out of the gate I have to say that LA’s Arms of Tripoli are a refreshing listen when it comes to instrumental/math rock/post rock bands. But for these guys and girl, giving them labels feels like a bit of a pigeonhole. Dream in Tongues takes some nostalgic detours while remaining light, breezy, effortless, hard hitting, brutal, and math-y when need be—never math-y to the point of pretension. A group of musicians from various other bands (Signal Hill, The Lights From Here, and The Half Mantis Group to name a few), Arms of Tripoli play for the love of the music, and it’s that love that had me hooked; believe it or not, I too love music.
When I named nostalgia as an album high point I wasn’t kidding: many of the moments on Dream In Tongues have a “tip of the tongue” quality (no pun intended). Main inspirations make themselves known very quickly—I’m looking at you Explosions in the Sky and A Shoreline Dream. You can also hear the influence Omar Rodríguez-López/The Mars Volta, Circa Survive, Mt. Saint Helens Vietnam Band, Modest Mouse, Mirror Travel, Deftones, Tool, My Bloody Valentine, Queens of the Stone Age, and then some. The first track, “Miniature Habitats,” immediately takes on a noticeably aquatic, dream-like shimmer that easily pairs with A Shoreline Dream or Mirror Travel. Just as the former’s three album split was a semi-conceptual, driving force of musical imagery and feeling, Dream In Tongues also has those same qualities. The opener is followed by “Velcro Thunder Fuck,” which goes for a large swath of sound textures and takes a lot of direction from acts like Karate or Explosions in the Sky.

What also helps is the fact that each member seems to know their way around an instrument. Songs like “Scraping Skies” and Escalator Jazz” sound like simple scale exercises, but because everything is so consistent the album remains engaging. “Snowed In,” one of my favorite tracks, takes a dark, moody turn that escalates for the better. Embryonic blooms from the Deftones later Koi No Yokan/Diamond Eyes period pair themselves with a brutal, psychological plod reminiscent of “Lost Keys (Blame Hofmann)” from Tool’s 10,000 Days.
If you’re a fan of instrumental experimental post rock then this is a release for you. Along with the nostalgia factor you’ll also feel the immediate pull of its precision—it’s almost too precise. Even if you don’t have share my exact nostalgic frame of reference, you still have a fantastic album. Dream In Tongues isn’t a shy album, and with each listen there are more discoveries to be made in its dense, lush layers; its appeal is only limited by your open-mindedness. (As a critic I have to make one request: please press this on vinyl—it would make for one pleasing spin!)
Key Tracks: “Velcro Thunder Fuck,” “10th Graders Forever,” “Snowed In”
Artists With Similar Fire: Explosions in the Sky / Reserve de Marche / A Shoreline Dream

1 thought on “Arms Of Tripoli: Dream In Tongues [Album Review]”