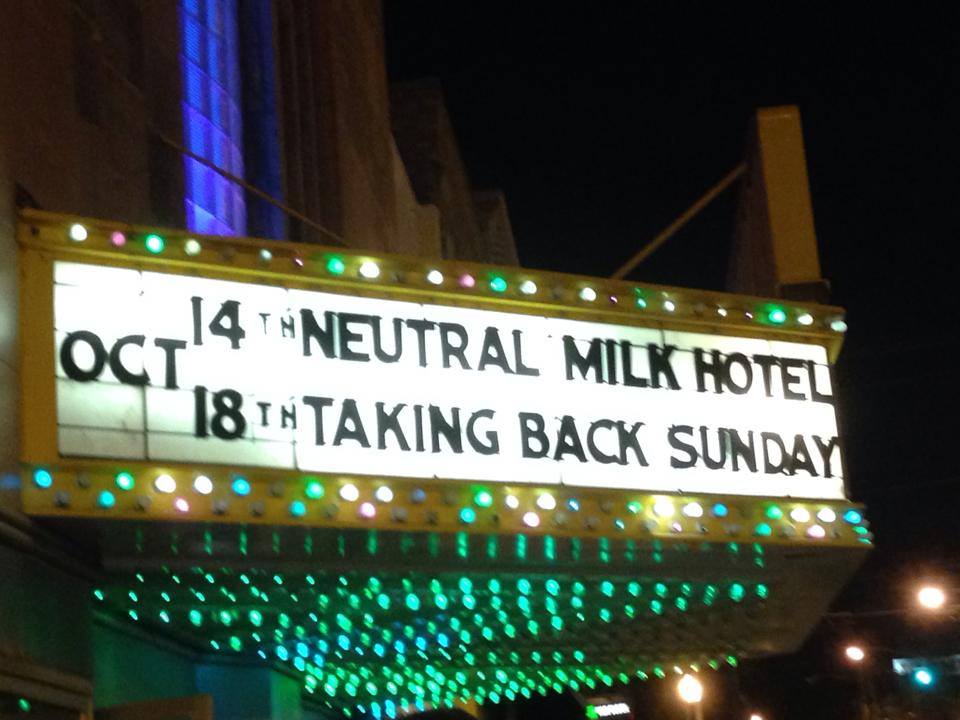 Show reviews are usually either disregarded and/or seen as a way to kiss the ass of the artist(s) seen. But this one is something different: a review of an Elf Power and Neutral Milk Hotel show can only be written out of sincere respect. To call Mangum a god or to worship him in any fashion would be an exercise in futility—as Mangum says, “God is a place you will wait for the rest of your life.” But neither is Mangum a tall-tale folk hero. Neutral Milk Hotel always seem to defy categorizations, confinements, and controversies. But for now I’m getting ahead of my self—after all, Elf Power played too.
Also part of the colorful cavalcade that is the Elephant Six collective, Elf Power is fresh off the release of their 12th LP, Sunlight on the Moon (TFN Review). Whipping through a set that included a Bill Doss remembrance tune (OTC’s “Jumping Fences”) and a joking stab at the inappropriately un-death metal of “Total Annihilation,” the set also featured the slowed-down tempo change of the short and charming “A Slow Change,” the dark, echoed call and answer of “Darkest Wave,” the heavy, fuzz stomps of “Strange Designs,” and the rip-roaring closer “Everlasting Scream.” Elf Power didn’t serve as a roadblock to Neutral Milk Hotel, they only added excitement to the already fervent Neutral Milk Hotel-starved crowd.
As soon as the set ended the air rapidly filled with excitement-what’s another twenty-minute wait after a decade and a half? The excitement was justified as Mangum and Co. defied classification yet again, lumping everyone in the audience into their fuzzy, woolen world. At points I was a bit perturbed, but not by the band—Neutral Milk Hotel demanded respect as we were asked to not take any video or photos, but Mangum called out at least one would-be photographer, shaking a finger and asking them to knock it off. Trust me: you‘re never going to forget you saw Neutral Milk Hotel. The band seemed intent on giving the crowd an experience that would result in sacred memories, and they did not disappoint. The white whale of the musical world—long-haired, appropriately bearded, and slightly obscured by a Cuban Army hat—Jeff Mangum, mustachioed drummer Jeremy Barnes, brass bellower Scott Spillane, the new and equally-impressive multi-instrumentalist Jeremy Thal, long time cohort and Hotelier Laura Carter of Elf Power, child like multi-instrumental muse of The Music Tapes’ Julian Koster, and Mangum’s wife, the radical filmmaker Astra Taylor, all took the stage in a mythical fashion—we seriously couldn’t clap or say thanks for returning loud enough. From the very first strums of “The King of Carrot Flowers, Part 1” everything was a exciting return to form. The sing-alongs began, the anticipation melted into elation, and the packed house was at full attention. Transitioning swiftly into the opening drone of “The King Of Carrot Flowers Part 2 & 3,” it really goes without saying that you don’t know excitement until you’re shouting “I love you Jesus Christ/Jesus Chris I love you yes I do” along with the band you never thought you’d get to see. Neutral Milk Hotel sounded fresh and practiced yet ragged and homespun, and with almost all of the 1998 classic In Aeroplane Over The Sea (TFN Classic Album Revisit) being represented—sans “Communist Daughter”—everyone had their place and time to shine.
Spillane was a huge crowd favorite, ringing in the brass parts with epic precision. When he wasn’t playing he was spitting out every lyric with Jeff and/or keeping time with a fancy trombone dance. Highlights for Spillane included the melancholy waltz of instrumental “The Fool” as well as the fantastically appreciated “Untitled (The Penny Arcade In California)” and the bouncy, joyous jive of “Songs Against Sex.” Gaining just as much appreciation, Julian Koster was just as much in form and talented as the rest, his singing saw on the explosive “Ghost” and the ever-rising title track “In The Aeroplane Over the Sea” near-perfect replications of their studio counterparts. Koster was also impressive on bass duties, enveloping the audience in his boom during high-energy pieces like “Holland, 1945” and “Gardenhead/ Leave Me Alone.”
It was a joyous occasion for all. Generalissimo Mangum was in top form as he hopped, galloped, and rocked around in circles almost in his own world, appreciative and comfortable. Whenever a memorable sing-a-long approached Mangum prodded the crowd with a sharp, quick “Come on” launching everyone into the fabled da, da, da’s of “Oh Comely” or the or the slowing de, de, de’s of “Two-Headed Boy.” He even joked when the beginning seconds of final track “Engine” didn’t exactly come together, prompting a re-start: “Thank you. [Pause] This is ‘Engine, Part Two.’”
The Pauli exclusion principle states (more or less) that two bodies cannot occupy the same space. But when I think back to this Neutral Milk Hotel show, I feel like we were all in the same space, and more than one at that. Seemingly in the Madison Theater as individual people, at the same time we were all wrapped into one, impossibly coexisting in Mangum’s weird and wondrous aeroplane over the sea.
*It should be noted that pictures were not allowed by the artist at this show so you will just need to imagine Mangum’s beard!
Neutral Milk Hotel: Madison Theater—Covington, KY—14 October 2013 Setlist
The King of Carrot Flowers, Part One
The King of Carrot Flowers, Parts Two & Three
Holland, 1945
A Baby for Pree
Gardenhead / Leave Me Alone
Everything Is
In the Aeroplane Over the Sea
Two-Headed Boy
The Fool
Naomi
Song Against Sex
Ruby Bulbs
Snow Song, Part One
Ghost
[untitled] (The Penny Arcade in California)
Two-Headed Boy, Part Two
Encore:
Ferris Wheel on Fire
Oh Comely
Engine
-Review by Christopher Tahy with Simon Workman

The Avett Brothers: Magpie And The Dandelion [Album Review]

The Dodos New Video for “Substance” – Live with MMO