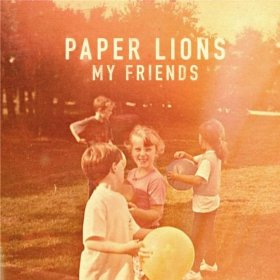 Fire Note Says: Paper Lions’ power pop returns with comforting steadiness on My Friends.
Album Review: Prince Edward Island’s Paper Lions’ fifth album My Friends reminded me very much of an album I reviewed earlier this year, Noah And The Whale’s Heart of Nowhere. In fact My Friends sounds like the record Heart of Nowhere could have been, or what I wanted it to be. Power pop is the main flavor, with heavy ingredients of jangly guitars and vocals that were full of harmony. The influence of the guitars reminded me a great deal of Surfer Blood as well. My Friends is fun with spates of seriousness and mood that serve to balance the album that keeps it interesting from beginning to end.
My Friends is a relatively brief 10-track, 31-minute affair. Most of the tracks here are upbeat, mid-tempo numbers that are focused on creating melody. “Bodies In The Winter” adheres to the formula, with lead singer John MacPhee’s high voice providing the vocal hook one minute in. The syncopated rhythm keeps the track from being overly predictable or too saccharine, which can be a common trap that power bands fall into. 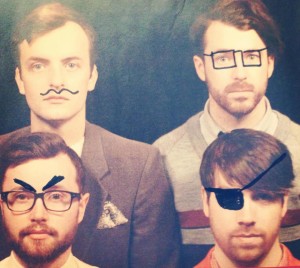 “Sandcastles” is a surf-rock number that again shows off MacPhee’s ability to meld his voice into the music. The song evokes a day on the beach in both its lyrics and the impression of the music. One of my English professors would have lauded the band for its tight thematic focus. During the song’s 45-second interlude I heard an homage to original surf-rockers, The Beach Boys. In a wise move the next song “My Friend” has a bit more of a new-wave sensibility to it, which contrasts nicely with the harmonies of the previous track. Just as a master chef would do, the different musical flavors make for a satisfying meal.
My Friends is a bit limited in that it sticks to the genre’s norms. There’s not much here that is groundbreaking, but what Paper Lions does is done very well. This is a great summer album but could also lighten one’s mood in the winter months.
Key Tracks: “Bodies In The Winter,” “Sandcastles,” “My Friend”
Artists With Similar Fire: Telekinesis / Noah And The Whale / Surfer Blood
Paper Lions Website
Paper Lions Facebook
Fountain Pop Records
-Reviewed by Matthew Heiner