Fuzz: This Time I Got A Reason [7-Inch Feature] 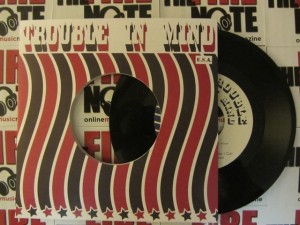 How in the hell does this kid have time to keep up with anything? Ty Segall—San Fran’s prodigal garage son—does it all: his various bands play surf music, punk, psychedelics, garage blues, sludgy string growlers, and on top of that he’s released a mountain of solo albums. It occurs to me that Mr. Segall may be bored. “Hey I’ve got an idea he though,” “Maybe while I record SLEEPER, my follow up to the acclaimed Twins, I’ll form a new band FUZZ and release a full length with them.” Having run their second effort, the Sleigh Ride 7” released by In The Red, this is in fact their first 7” release on Trouble In Mind Records.
A stepchild risen from the grave of bands such as Black Sabbath, Morgen, Blue Cheer, Wicked Lady, Witch, and Jerusalem, their second 7” focused more on the Blue Cheer area of fuzz. The This Time I Got A Reason 7” inch goes a tad more sinister with welcomed amounts of Witch and Tommy Iommi-style menace. Side A, “This Time I Got A Reason,” is a molten sway of fuzz face infusions and a classic Segall freak shriek that melt straight into the ear drums. The fun part about this 7” is that, in my humble opinion, they saved the best for the B Side. “Fuzz’s Forth Dream” calls back to a Paranoid-era Sabbath, especially an inside out “Electric Funeral” vibe to be precise. It all really starts to hit home as soon as Ty starts throwing out lyrics about “evil eyes.” While lyrically it’s not the most thought provoking piece, it’s one heavy groove that’s sure to please fans of acts like Sleep, The Melvins, and Wolfmother. 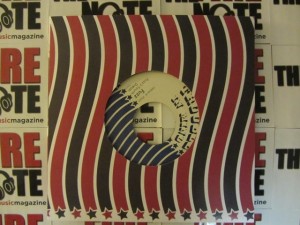 The jacket is a standard cardboard sleeve. But what makes this special is the stars and stripes housing is new to Trouble In Mind Records. The wax for my specific 7-inch is black, that’s because the limited pressing of 500 randomly mixed vinyl sold out so quick. I recommend trying to get these two tunes in any form that you can—Trouble In Mind has the 7” still on their site and it comes with a digital download—because having an ear full of FUZZ isn’t as bad as it sounds.
Trouble In My Mind Records
-Feature by Christopher Tahy