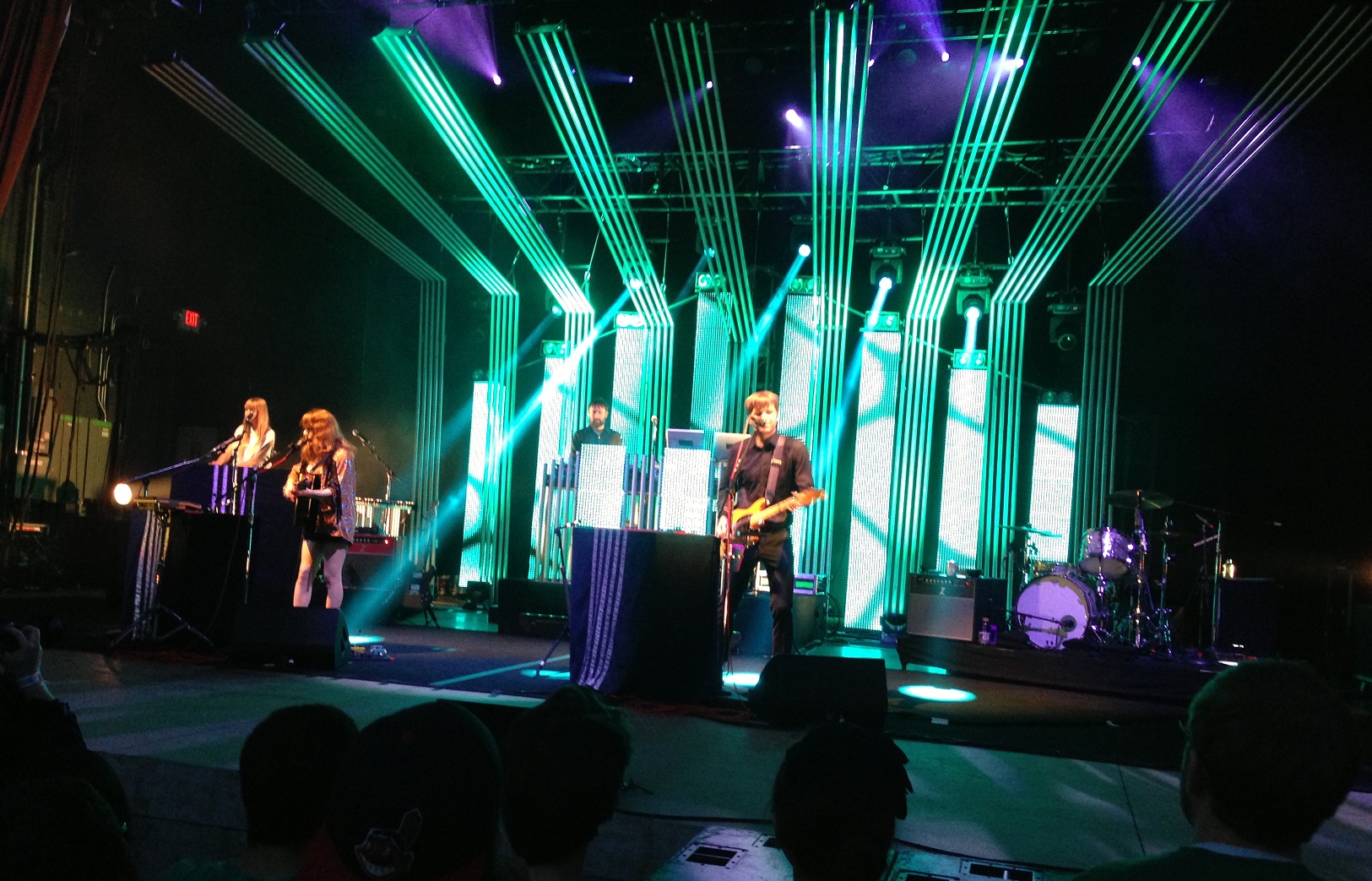 When Ben Gibbard (of Death Cab for Cutie) and Jimmy Tamborello (of Dntel) released Give Up in 2003, their collaborative album under the Postal Service banner, no one could have predicted the runaway success it became. Songs appeared in movies, TV shows, and were remixed and covered by artists as wide-ranging as Iron & Wine and The Shins. Since that time fans have clamored for a second album, and while Give Up was just released as a 2-disc, 10th anniversary deluxe edition with B-sides and a few “new” tracks, fans were instead treated to the announcement that the band would be going on tour for the first time since the album’s release. Both Gibbard and Tamborello as well as third member Jenny Lewis (whose vocals appeared on nearly every Postal Service track) would be performing, along with Laura Burhenn of Omaha-based The Mynabirds on additional vocals and instruments. We caught the band at their June 8 show at the LC Pavillion in Columbus.
Opening the show was Owen Ashworth’s Advance Base, formerly known as Casiotone for the Painfully Alone. A one-man-band in the Postal Service vein, Ashworth started things off on a subdued note, interacting with the crowd in a humble, awkwardly charming manner. Setting up camp behind a vintage Fender Rhodes electric piano with various drum machines and synth instruments surrounding him, Ashworth turned in a set of mostly new tracks from his latest album, lasting about forty minutes. The songs might be described as a slightly more depressing version of The Postal Service, with Ashworth’s vocals sounding more reminiscent of someone like David Bazan with a little Connor Oberst croak for good measure. While the set seemed a bit long to some in the crowd, the songs fit well with the material The Postal Service would play, and Ashworth’s self-deprecating humor kept the audience engaged—at one point he noted, “This is the song we made a video for, so hopefully you like it. Because if not… Uh oh…” 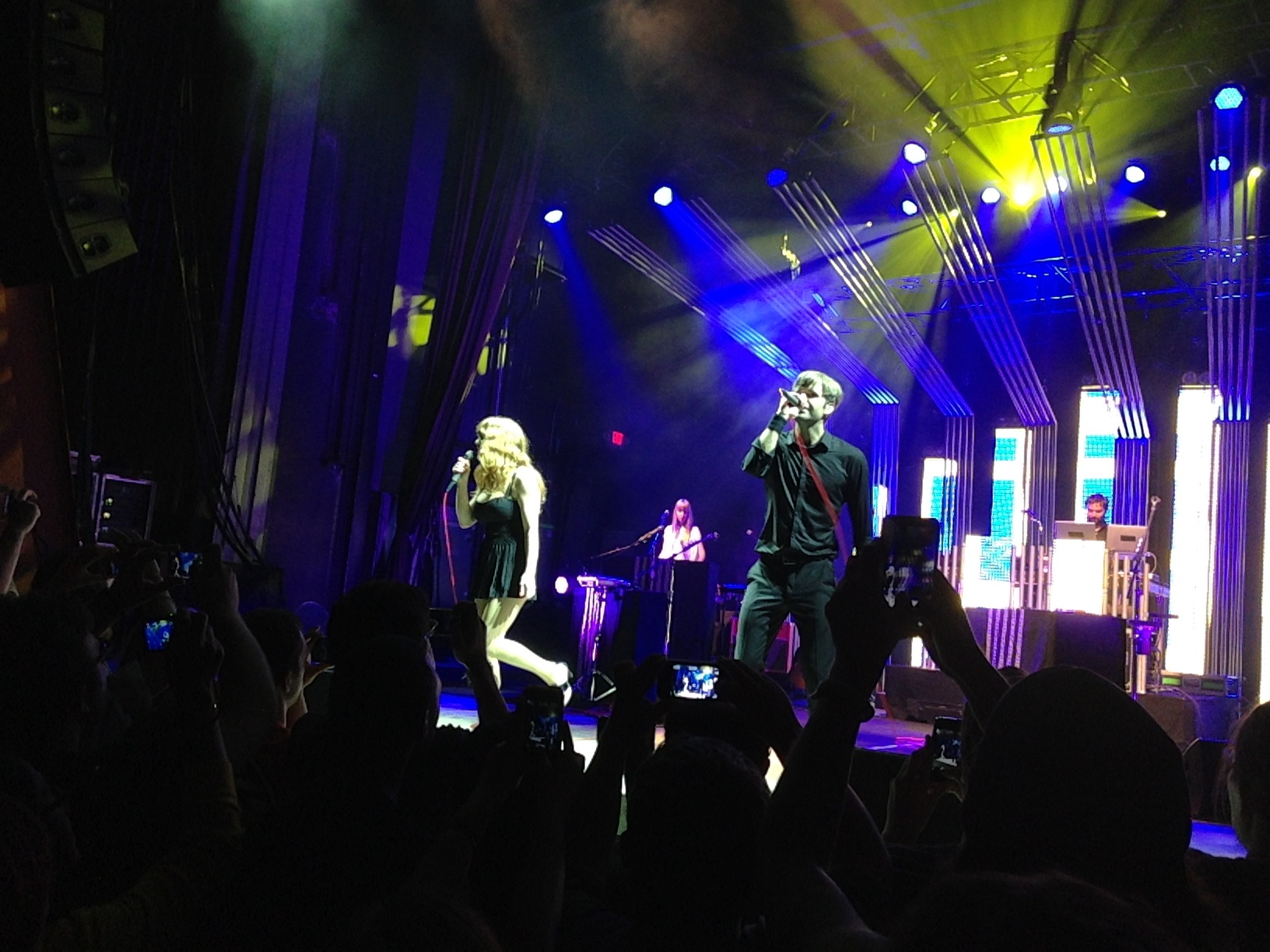 Once the Postal Service took to the stage, however, the mood changed dramatically. Backed by an impressive lighting display, the band emerged to the cheers of the hyper-energized crowd, starting with Give Up opener “The District Sleeps Alone Tonight.” Gibbard was on guitar for a surprisingly large chunk of the set, with Lewis switching back and forth between keys and guitar. Tamborello generally stayed behind his elaborately-decorated “DJ Station,” surrounded by Apple laptops, synths and drum machines, while Burhenn added more keys as well as some nice xylophone touches here and there. As expected the band mainly drew songs from Give Up, but there were a few surprises, both song- and instrument-wise. A drum set sat on the right hand side of the stage, and every few songs Ben Gibbard would shed his guitar and run to the kit, bashing away at the main beat or occasionally soloing. Jimmy Tamborello added vocals on “Nothing Better,” and played melodica on a track or two. The band also played a fair amount of outtakes (in addition to every song on Give Up) including new single “A Tattered Line of String” and “There’s Never Enough Time,” covered “Our Secret” by Washington-state punkers Beat Happening, and began their encore with the collaboration that started it all, “(This Is) The Dream of Evan and Chan.”
The sound was great throughout, with Gibbard and Lewis’s vocals coming through loud and clear, and the band was visibly happy to be back on stage playing these tunes. Gibbard in particular seemed to be having a blast, and was very into the crowd, even doing his best guitar-hero pose for a cell phone-photographer a couple of rows ahead of us. By the end of the fourteen-song set (and two-song encore), the crowd was in a state of bliss. Considering the number of tracks played, the energy and attitude of the band, and the general good will of the crowd, you couldn’t have really asked for much more—except, of course, a second Postal Service album.
-Reviewed by Simon Workman
You can read The Fire Note review of Give Up (Deluxe 10th Anniversary Edition) HERE.
The Postal Service Website
The Postal Service Facebook
Sub Pop Records