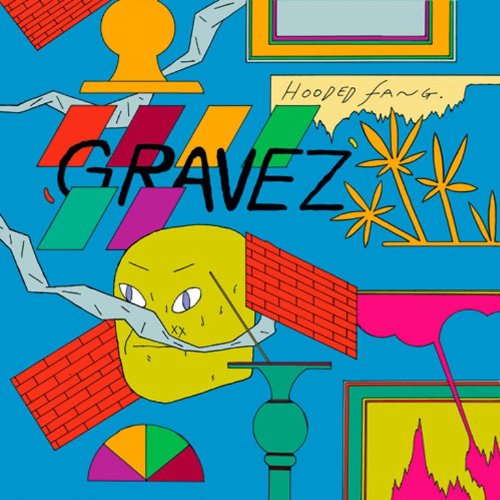 Fire Note Says: Hooded Fang pack charm and quirk into blistering power pop.
Album Review: I know it’s common to chide a band for their overuse of a trope or technique over an entire album. But I won’t do that here: Canada’s Polaris Prize-nominated Hooded Fang not only avoids this repetition but elevates their concept with a messy lo-fi charm that manages to engage as well as delight. Gravez, the outfit’s third album, is an energetic thrill ride that smashes, bends, and warps together sounds from artists like Thee Oh Sees, Broken Social Scene, and Black Lips. But underneath all the weird angular guitar and jarring, surf-tinged sound walls is a very accessible rock n roll album, all clocking in at just under 40 minutes.
Hooded Fang seems to be quite confident as they give you a peek right at the start as to what they’re all about. With “Dry Range Intro” the album plays like demented elevator music, and if that doesn’t strike your interest for what’s to come, then “Graves” is the exact hook you’re looking for. If the intense bass line doesn’t sell you, or the careening Thee Oh Sees energy isn’t enough, you’ll be shouting along with the call and answer chorus of “So many places and they’re all the same / Why you looking at me,” in no time. “Bye Bye Land” plays a bit on the softer side of Hooded Fang; I only say a bit because of an underlying level of fuzz permeates through Daniel Lee’s dreamy vocals.

“Wasteland” has to be one of—if not the—catchiest songs on the album. It’s the equivalent of a turbo-charged ice cream truck if the driver were on speed. The thumping bass, elastically bouncy guitar lines, and a vocal melody on the chorus that mimics the guitars make for one of my favorite tracks of 2013 so far. While it is certain that Hooded Fang can pull off an abstract sound, with “Genes” they show that they can do sexy too. It’s nothing that we haven’t heard before, but in addition to the steady 1-2-1-2 tribal drum, a metronome like bass, and simple guitar lead, it’s Lee’s vocals here that again make this a winner, packing enough swagger to induce moves like Jagger. To let us know that our funhouse tour is over, “Dry Range Outro” plays the elevator to a stop and lets us off.
Hooded Fang have made a very commendable album: Gravez deserves its praises for production, mixing, tones, and techniques. My only gripe would be that the band could have tried a bit more and pushed harder. There are a lot of the same ideas applied over the 10 track sprawl, but they are catchy ideas that will have you clamoring for the repeat button once the album is over.
Key Tracks: “Graves”, “Wasteland”, “Never Mending”
Artists With Similar Fire: Thee Oh Sees / Rich Aucion / Gaz Coombes
Hooded Fang Website
Hooded Fang Facebook
Full Time Hobby Records
-Reviewed by Christopher Tahy