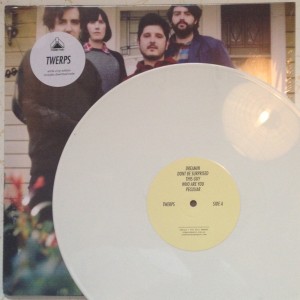 You can now grab a copy of the Twerps self-titled debut on white vinyl from Chapter Music HERE if you live in AUS/NZ. Anywhere else you can pick up one from Underwaters People Records HERE.
Below is The Fire Note review of the 2011 record.
“If you really like simple guitar, simple lyrics and bright melodies then the self-titled debut full length from Australia’s Twerps will hook you instantly. The band brings a more mature composure to their full length compared to their earlier four track recordings, as they hit a real studio this time and it shows.
Marty Frawley’s voice has a laid back swagger to it that always has a cool tint of urgency but never gets out of control. This calmness wins you over as you just want to chill with the Twerps regardless of each track’s tempo because you can rock out on the over five minute “Jam Song” or follow each guitar strum on the soft two minute “Bring Me Down”. First single “Dreamin” contains an irresistible repeated guitar line that grabs you from the beginning as “Who Are You” turns into a big swaying sing along about inebriation that just feels right.
Twerps are not going to wow you with their musicianship, songwriting or big sound but they have an indie element to the band that just simply works because they also don’t think they are that important – they are just out to make likable music and guess what? – They do!”
Artists With Similar Fire: Real Estate / The Clean / Youth Lagoon
Twerps Website
Twerps Facebook
Underwater Peoples
Chapter Music