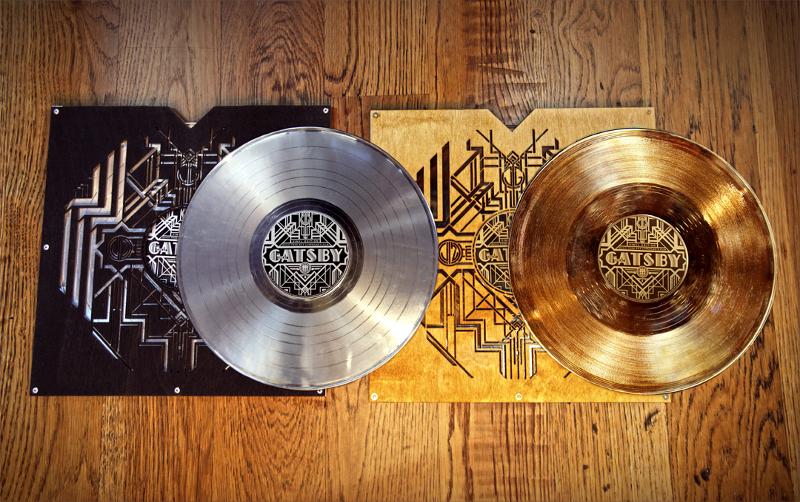 Third Man Records has gone the extra mile with their limited-edition version for The Great Gatsby soundtrack in pioneering a never-before released method for vinyl records.
Both LPs in the set are blindingly reflective metalized discs. Disc one is platinum and disc two is gold. These are the first-ever commercially available records made using these precious metals via this process.
Not stopping there, the records come housed in a entirely unique laser-cut wooden LP jacket riveted to aluminum spines. All of these elements (gold, platinum, aluminum, wood and brass) showcase the Art Deco-meets-modern style, classic meets cutting edge, which is the essence of The Great Gatsby film and Third Man Records. The video below says it all!

These unique hand made sets will retail for $250 and Pre-Sales will be available in a limited number through the Third Man website (US only) from 9am on Friday May 10th in order to coincide with the Great Gatsby cinema release. Also on Friday the 10th, the first 100 physical copies of the set will be available in the Third Man retail store in Nashville from 10am.
In addition to the limited edition, Third Man is also announcing the release date of June 11th for the standard edition double album. The soundtrack will be on 180 gram vinyl and housed in a Gold Foil stamped gatefold sleeve. Pre-sales for this standard edition of the soundtrack will also be available on the Third Man website on Friday May 10th.