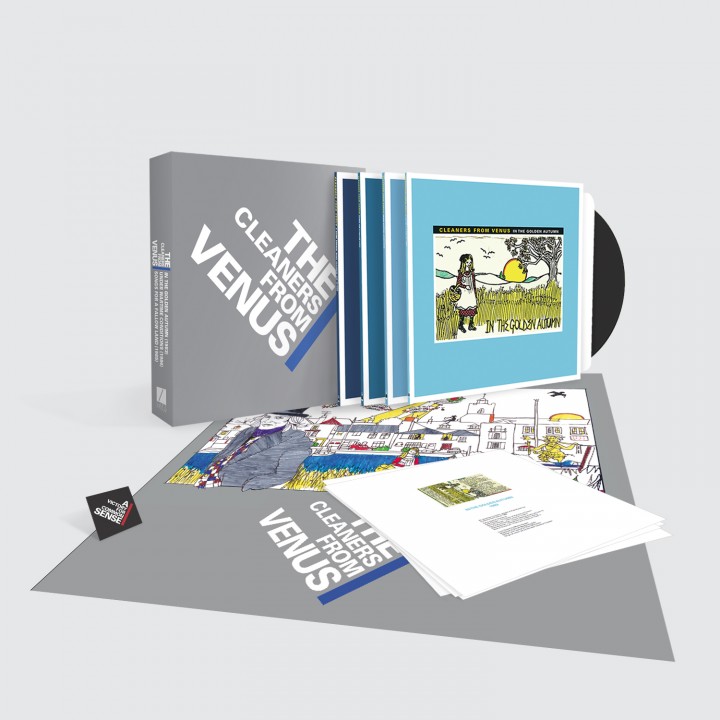 This is Volume Two of the enthusiastically-received Captured Tracks repackaging of The Cleaners from Venus. This part of the collection covers a 3-year period between 1983 and 1985 for the Brit Lo-fi combo, now being described as ‘D.I.Y Beatles.’ While the rest of the 1980s rock world had immersed itself in epic and often empty gestures, the Cleaners concentrated on neat little lo-fi pop songs of a quality and standard which, as one critic later noted: “Pop music elsewhere had pretty much forgotten.” By now, one of the band’s founder members, Lawrence Elliott had left the band. Its chief songwriter, Martin Newell, like the captain of a strange pirate ship took charge, and Cleaners from Venus went sailing.
Here within this second fractured pop feast, are three remastered albums by The Cleaners – as well as a fourth one, containing not only the usual ‘rarities’ but also previously unreleased tracks and a few genuine treasures. The Cleaners had a back story, too. Included here are some of its fragments. Even today the chief question asked about the Cleaners from Venus is why they weren’t huge at the time. The answer to that is that Martin Newell believed that if they involved the music business in their work, the music might be spoiled. They therefore never bothered approaching a record company. For most of their existence, in fact, they didn’t even have a telephone. The Cleaners weren’t so much independent, as genuinely feral. You won’t have heard pop music like this for quite some time.
You can now pre-order the box set HERE and see the full album tracklisting below.
In the Golden Autumn LP (1983)
Renne
A Halloway Person
Ghosts In Doorways
The Autumn Cornfield
Please Don’t Step On My Rainbow
Balloon Drop Shadow
Krugerrand Gladiators
Golden Age Saturday
Marilyn On A Train
Sandstorm In Paradise
Victorian Society
A Fool Like You
Under Wartime Conditions LP (1984)
Summer In A Small Town
Johnny The Moondog Is Dead
Hand Of Stone
Drowning Butterflies
Radio Seven
Fracas On West Street
Lukewarm Love Song
A Blue Wave
Song For Syd Barrett
The Winter Place
Songs for a Fallow Land LP (1985)
Sun Comes To The Wood
Julie Profumo
Soul Monday
Gamma Ray Blue
Heroin Clones
Winter Place 2
Golden Lane
Stars Are Cold
Late Night
Beyond
(… and beyond)
A Dawn Chorus – Early Cleaners and Beyond (all unreleased songs) LP
Roots and Beginnings (August 1967)
Russian Picture (Spring 1980)
Bon Temps Roulez (Spring 1980)
Mrs. Killer (Summer 1980)
Young Jobless (1980)
The Secret Dreams of a Kitchen Porter (Spring 1981)
It’s Been So Long (Summer 1982)
Something In My Eye (Early 1983)
When Fire Burns Dreams (Dec 1983)
Amateur Paranoiac (Dec 1983)
Drowning Butterflies (big expensive version) (Nov / Dec 1984)
Beyond the Blue Horizon (Spring 1985)