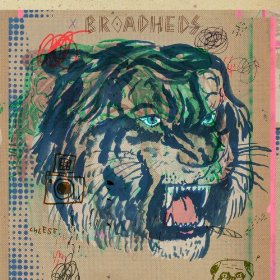 Fire Note Says: Peter Walker returns with a 2 tone spirit and a quick guitar.
Album Review: You may know Peter Walker from his band Eulogies or his earlier solo work but Broadheds represents his new gig with James King (Fitz & The Tantrums), Justin Meldal-Johnson (Beck, M83, NIN) and Denny Weston Jr. (Earlimart, The Kooks). Broadheds debut represents another new avenue for Walker with its loose rock/ska vibrations and its more raw sounding production.
The production here is the first big difference for a Peter Walker project as Broadheds was recorded live over three days and has a bit of a rough undertone to its 29 minute running time. The album recalls the late Joe Strummer & the Mescaleros with its ska rhythms rubbing up next to some good old fashion rock n roll. The opening track “Nothing That I Care About” rips out of the gate with a strong in your face drum beat while the saxophone keeps a mirrored pace. This care free vibe keeps rolling as each upbeat rocker stays right around the two minute mark (or shorter) so there is absolutely no filler. The band creates a solid 2 tone sound throughout their self-titled debut that hits its peak on the catchy “Pick Me Up” which has the same style as several classics from The Specials or Bad Manners. 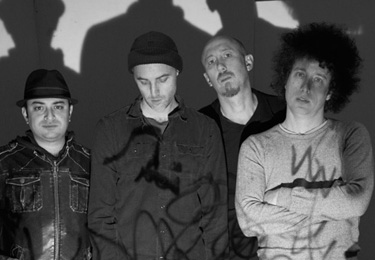 Not everything is memorable on this debut as tracks like “Today” and “I’m Angry” could have been pushed further than their minute and half running time. Especially on “I’m Angry” because the beats and vigor around the chorus is fun but it just doesn’t last long enough. Broadheds does have a real balance even though several songs here don’t quite live up to their potential and leave you wanting more; there are still plenty of tracks to keep your interest and make the record worth every short second you give it.
Broadheds have a real potential to expand depending if that is something Walker wants. The players here are solid along with his songwriting skills so there is no reason that this ska/rock/reggae/punk style should lay dorment. If you are into straightforward rock or just looking for something new with a little bit of edge then I think the Broadheds are for you regardless of the production quality. The tracks are fast, the attitude is up and the spirit is care free which carries Broadheds right to the short end!
Key Tracks: “Pick Me Up”, “Something All Our Own”, “Nothing That I Care About”
Artists With Similar Fire: Joe Strummer & the Mescaleros / The Godfathers / Bad Manners
Broadheds Website
Broadheds Facebook
Dangerbird Records
-Reviewed by Christopher Anthony