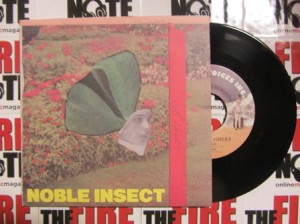 “Noble Insect” is the fifth and final single from Guided By Voices forthcoming full length English Little League which is due out on April 30th. The 7-inch A-side, “Noble Insect”, is an addicting little hum along number that will have you chiming in “Japan, Japan, Japan friction in Japan” almost instantly. The song has a very somber and serious tone to it and it is easy to imagine Pollard just sitting on a stool and delivering this one as his foot taps slightly to the slower beat. Compared to the other singles, “Noble Insect” is the most subdued but full of indie swagger.
The first B-side here is the classic sounding Tobin Sprout track, “Waves of Gray”, which is a short and sweet number clocking in at 1:28. The track begins with a piano driven short verse and then musically expands with plenty of singing the chorus “Waves of Gray” in his soft falsetto voice. It is a simple but elegant song. The second B-side is the amusing “See You Soon” which you can hear exclusively below. This song also begins with some simple piano playing before you get the rough Pollard vocals that battle the piano for the true focus of the song. What I like about the track is that it ends with Pollard a cappella reaching for an octave that is almost out of range as his voice fades out “See you…” to close. It is the perfect ending lyrically as it is the last track of the five singles and now opens the door for English Little League in two weeks.

The jacket on this 7-inch once again has the soft paper feel of the earlier singles. The 45 is standard black, the label is the standard GBV Inc. imprint, the single includes a free digital download and the pressing is limited to 1000 copies worldwide. 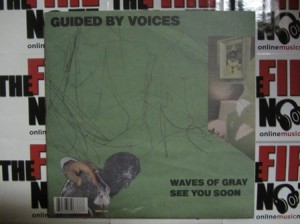