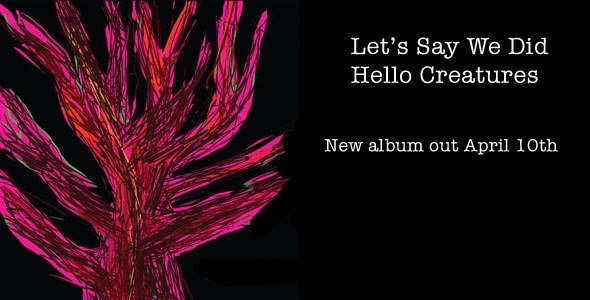 Formed in 2008, and after a couple of years lurking on the periphery of Stockholm’s music scene, Let’s Say We Did began to gain momentum with the release of a trilogy of EP’s. In November 2011 the band released their debut, self titled, album produced by Let’s Say We Did and Pelle Gunnerfeldt (The Hives, Fireside, Bear Quartet, Hello Saferide). The group has drawn comparisons to the likes of Real Estate, Teenage Fanclub and Pavement. You can check out their new single “Into Wherever” below.

From the bubbling atmospherics of opening track “Into Wherever”, to the languid, wilting, ambience of Hey Kid and the understated but no less powerful I Was There Too, Hello Creatures’ one constant is vocalist Sebastian Fors’ – who also has a project called Loose Cannon with Max Bloom of Yuck – pained Swedish drawl. You can see their video for their first single “Goodbye” as well. Hello Creatures releases April 10th on Nesna Records.