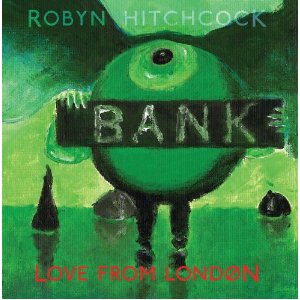 Fire Note Says: Love From London has a more streamlined pop sound, but still retains all the trademark Hitchcock charm.
Album Review: I’m not going to proclaim myself the world’s leading authority when it comes to the music of Robyn Hitchcock, but I think I’m pretty well versed, and in the past 15 years or so, I have amassed quite a collection of the man’s work, From the Soft Boys to the Venus Three, and all points in between. One thing I do know is that when Hitchcock releases an album with a green cover, it’s typically pretty special. Examples of this include I Often Dream of Trains, Eye, Ole Tarantula, all high points of his career. Love From London also boasts a green cover, so my excitement level was pretty high going in to this one.
“Harry’s Song” gets things off on the right foot. It’s classic Hitchcock with the haunting vocals, simple piano accompaniment and lysergic lyrics. Things change drastically on “Be Still”. The music becomes sunnier, and there appears to be a drum machine keeping time behind Hitchcock. It’s a much more straightforward pop production that what I was expecting. It took a few listens before it sank in. Robyn still sounds like Robyn, and his voice is still trippy as hell, but it was quite jarring at first to hear it in this context. “Stupified” also has some instrumentation, canned beats and percussive handclaps. But once again, his songs are able to overcome the music; however I’m starting to have some concerns at this point. “I Love You” gets things back on more familiar footing musically, its lysergic pop at its finest. The second half of the record flows the same blueprint as the first, mixing in familiar Hitchcockian elements to unfamiliar soundscapes, culminating in the epic album closer “The End of Time” which is the perfect distillation of this new pop style. It’s epic in both sound and scope, a huge psychedelic pop number that wouldn’t have been out of place on the first Stone Roses lp. 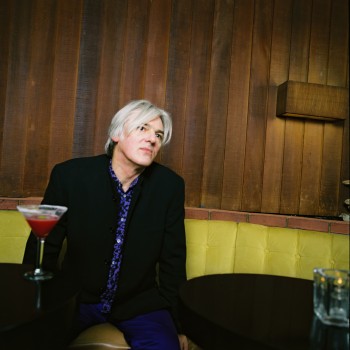 This was not the record I was expecting to hear from Hitchcock. It’s obvious he felt like it was time for a change in his sound. His last three records, Goodnight Oslo, Propeller Time, and Tromso, Kaptain while all good records, weren’t exactly breaking new ground for him. With Love From London, Hitchcock is definitely breaking new ground for him, and it sounds like he is really enjoying it. His songs sound inspired, and you can almost hear the gleam in his eye as he delivers the songs in his trademark style. While Love From London isn’t ever going to be your favorite Hitchcock record, it’s one that you are going to want to spend some time with.
Key Tracks: “The End of Time”, “Harry’s Song”, “I Love You”
Artists With Similar Fire: Guided By Voices / R.E.M. / Syd Barrett
Robyn Hitchcock Website
Yep Roc Records
-Reviewed by Kevin Poindexter