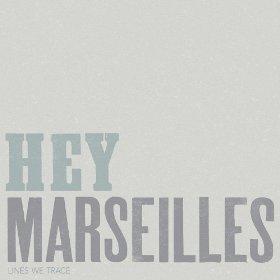 Fire Note Says: Sophomore album from Seattle’s Hey Marseilles brings the Northwestern sound back to the masses.
Album Review: Seattle Washington group Hey Marseilles revive a classic Northwestern sound on their engaging sophomore record Lines We Trace. The band arms themselves with a full arsenal of instruments as their tracks have layers of cello, piano, guitar, accordion, trumpet, viola and a nice booming drum. This of course is all held together with the Ben Gibbard like vocals of lead singer Matt Bishop.
Track after track the soft arrangements on Lines We Trace get in your head with their indie meets folk type of song structures that is somewhere between Death Cab, The Decemberists and The Lumineers. Not only does Bishop’s vocal have the same tone as some of the previously mentioned groups but he also has the same heartfelt emotional delivery that makes it hard to turn away. What makes Hey Marseilles stand out and equal their stated peers is the bands ability to create an indie pop undertone that boosts each song upward and outward. “Bright Stars Burning” is a perfect example of how Hey Marseilles utilizes their full array of instruments but also turns this track into a sprawling and big indie rock radio song. It has a depth that should make you notice because Hey Marseilles takes full advantage of having six members as they create large soundscapes that surround Bishop’s vocals but never once overpower him.

The album does run a similar tone throughout its 47 minute running time which upon the first several listens, I will admit that certain track names did not stick to memory because of this continuous vibe. The band does try to shake it up a bit with two instrumental offerings but even they conform to the similar laid back feel. Even with that dynamic somewhat hampering Lines We Trace a bit from a flow perspective, Hey Marseilles still succeed here with excellent songwriting, 100% emotion and a warm sound that is not that easy to achieve on record. This is easily a band that could blow up overnight like label mates The Lumineers so check them out now and get ahead of the curve because Hey Marsilles’Lines We Trace will strike a positive nerve!
Key Tracks: “Tides”, “Bright Stars Burning”, “Looking Back”
Artists With Similar Fire: The Decemberists / Death Cab For Cutie / The Lumineers
Hey Marseilles Website
Hey Marseilles Facebook
Onto Entertainment
-Reviewed by Christopher Anthony