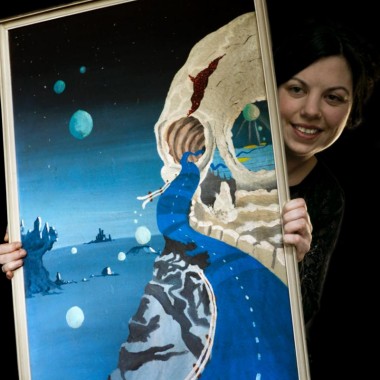 Fire Note Says: III strips away the noise and shows off a psychedelic west coast vibe.
Album Review: Has it really been four years since we last heard from Eat Skull? On their first two lps, both on the venerable Siltbreeze label, Eat Skull were your typical “better than average” shitgaze band, full of piss and vinegar, good songs, and completely over the top distorted “in the red” recordings. On III, the band has dialed back on the noise, and upped their game on songwriting. It’s obvious from one listen to the new record that over the course of the past 4 years, the band has gone through a significant period of artistic growth.
III shows off a more mature psychedelic side of Eat Skull. The band augments this psychedelic sound with traces of space rock, krautrock, and even some New Zealand influence. It’s all over the map stylistically, yet it holds together as an album remarkably well. In fact, the variety of sounds and influences contained within III make it a more compelling listen. The album has peaks and valleys and even though the album is barely 30 minutes, it feels more substantial than that.

“Space Academy” immediately reminds of Can, it’s built on repetition and rhythm, but unlike Can, it features a stronger sense of melody and structure. It’s more mapped out than Can ever was. “How Do I Know When to Say Goodnight” is the weirdest song on the record, and also one of my favorites. It’s completely different than anything else on the record, it sounds like a refugee from a long lost cassette tape from Cleaners From Venus. It’s an incredibly catchy 60’s influenced pop song that sounds like it was recorded with a cheap microphone and a cheesy drum machine/keyboard combo. It’s great! The trifecta of “Dead Horses”,” Summer Inside” and “Amnesty Box” all have a strong kiwi influence. Catchy guitar pop done exceptionally well. “Catch em Before They Vanish” is a dark psychedelic raga that could have been recorded in the dark seedy corners of late 60’s California. It has a heavy Brian Jonestown Massacre vibe to it.
With III, Eat Skull has succeeded in shedding their shitgaze past. By stripping away most of the noise and tightening up their craft, they are out to prove that they are capable of taking their game to the next level.
Key Tracks: “Space Academy”, “How Do I Know When to Say Goodnight”, “Dead Horses”
Artists With Similar Fire: Brian Jonestown Massacre / Can / No Age
Eat Skull Facebook
Woodsist Records
-Reviewed by Kevin Poindexter