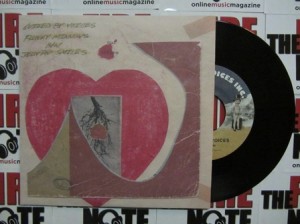 Let the fun begin! “Flunky Minnows” is the first of (count them) five 7-inch singles from Guided By Voices that come to you from the forthcoming full length English Little League that is due out on April 30th. The 7-inch singles will be released every two weeks leading up to the Little League’s release date. So with great excitement we dive into single number one – “Flunky Minnows”.

The just over two minute A-side is a solid straightforward pop nugget from the Dayton boys. The song possesses a mid-tempo pace that features Pollard’s crystal clear vocals out in front with some background harmonizing. The song by itself is not initially catchy on first listen but after several spins it has that GBV sticking power of so many classics that have come before it.

Now we get to the more eclectic lo-fi B-side, “Jellypop Smiles” (which you can hear exclusively above) that has a reverb tunnel effect vocal from Pollard and a slow strumming guitar that is complete with several odd sounding noises. The best part of the track is the 5 second haunting pause near its conclusion before the music fires back up for its last 23 seconds. Pollard sings it perfectly to sum up the single with the line “Jellypop smiles is the way to be – alright” – we couldn’t agree more.

Old school collectors will be excited with the jacket on Flunky Minnows because it has the soft paper feel of early singles when they were referred to as 45’s. The wax is standard black, the label is the now standard GBV Inc. imprint, the single includes a free digital download and the pressing is limited to 1000 copies worldwide. Next up in two weeks will be the Tobin Sprout rocking number “Islands (She Talks In Rainbows)”. 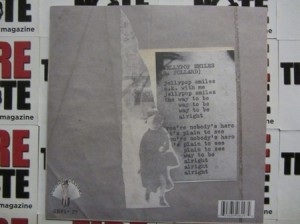 April 2nd – Guided By Voices: Xeno Pariah 7″ (Rips your heart out & puts it back a little sadder & wiser. B-side “Little Jimmy the Giant,” is a reprise of one of the oldest GBV songs.) GBVi-32

The Postal Service Confirm and Extend Tour Dates through July