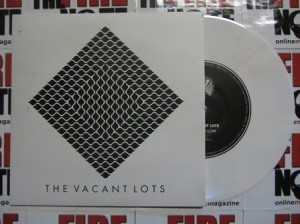 The Vacant Lots hail from Burlington, Vermont, and come at you on the this 7″ with two psychedelic reverb heavy burners. This 7-inch is the second official release from the duo of Jared Artaud and Brian MacFadyen which have influences ranging from Bo Diddley to The Stooges. All of which you can hear in their music and on this piece of wax.
“High & Low” is the A-sides which has a nice slow burn of whispering vocals for the first minute as its instruments build in the background. The song continues on its even flow but never passes a mid-tempo line. The B-side, “Let Me Out”, is an over 5 minute slow grinder that sounds like it should be surrounded with haze of fog. Its repetitive lyrics ingrain in your head as the song fades away making you reach over to move the needle back for another spin.
The 7-inch itself is a limited edition first pressing of 500 white with screen printed cardboard jacket packaging. The 7-inch is still available and includes a digital delivery of the album in 320 KBPS MP3 format. Currently the band is working on their debut full length but right now you can hear their new single “6 AM” below.