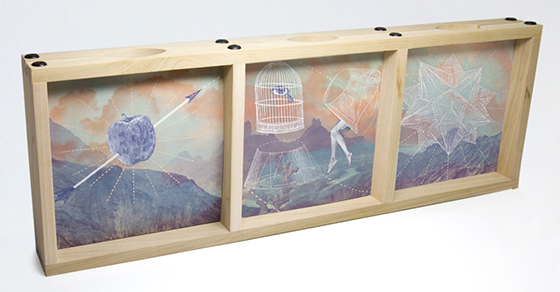 Kishi Bashi will release three elaborate 7″ singles via Joyful Noise Recordings. Each of the three releases features a single from Kishi Bashi’s acclaimed debut album “151a”, as well as an unreleased orchestral cover song on Side B. The Side A singles “Manchester”, “Bright Whites”, and “It All Began With A Burst” are paired with re-imagined orchestral quartet covers of ELO, Talking Heads, and Beirut.
The vinyl itself features a unique 2-color splatter design, with a different color combination for each 7″ record (Purple & Orange Vinyl [pictured], Clear & White Vinyl, Blue & Bone White Vinyl, respectively). Additionally, the cover art for each 7″ correspond to each other – forming a complete triptych landscape image when all three are placed side by side. 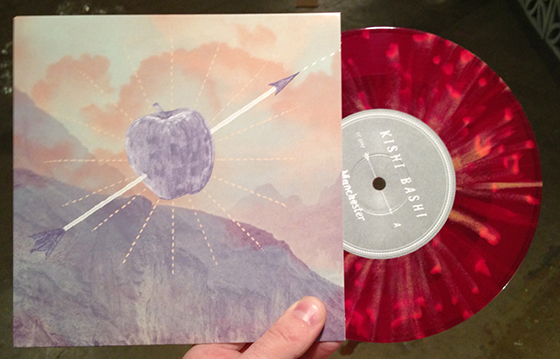 The first 500 copies are sold as a three-part box set, including all three 7″s in a custom-built wooden frame. Each Box Set is individually hand-numbered out of just 500 copies, and is personally signed by Kishi Bashi. The 7″s are also available for individual purchase. The Box Set release date is March 19.
You can grab a box set HERE.
TRACK LIST
Manchester
A Sunday Smile (by Beirut)
—
Bright Whites
This Must Be The Place (Naive Melody) (by Talking Heads)
—
It All Began With A Burst
Prologue / Twilight (by ELO)