The Purrs: Rotting On The Vine [7-Inch Feature] 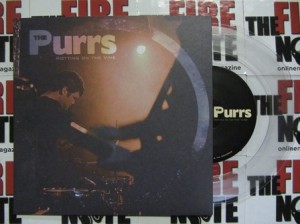 If you have been following The Fire Note over the years you already know that one of our favorite bands is The Purrs. The Seattle group has not released any new material since 2010’s mini-album Tearing Down Paisley Garden so we were very excited when the group sent us a copy of their new limited 7-inch for “Rotting On The Vine”.
The A-side here brings a familiar and likable sound as the guitar driven rock highlights The Purrs best qualities. “Rotting On The Vine” offers just the right amount of grit, a touch of psych reverb and a big sing along chorus that catches on quickly. The B-side, “You, The Medicine And Me” has a much more smoldering vibe to it as it has shoegaze undertones that strategically wander off between versus. The song pushes past the 5 minute mark and has a nice spiraling 1:20 ending that leaves you wanting more. That of course should be soon as this 7-inch is a preview to the upcoming full length, The Boy With Astronaut Eyes, due out later this year.
The 7-inch here is nicely housed in a heavy stock vinyl jacket that has artwork front and back. The vinyl itself is see-through clear wax and is in a designed solid sleeve with artwork. The release is limited to 500 hand numbered copies which is always nice from a collector standpoint plus a digital download is included. Currently there are still some copies available at the Fin Records website – so hurry!
The Purrs Website
The Purrs Facebook
Fin Records
-Feature by Christopher Anthony