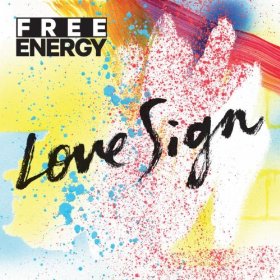 Fire Note Says: No rough edges here. Nor much of anything interesting.
Album Review: You know how wedding receptions are. There are people there from age two to eightytwo. Something must be done about the music. Concessions must be made. But the bride and groom, they need to show a little something. They’re not their parents. They’re not even their brothers and sisters. They need to show a little something with the music. The rock end of the playlist has to rock. But it must not offend. Nor rock things too rockingly. Concessions must be made at the wedding reception. So you program some of Free Energy’s Love Sign for the rockingest portion of the wedding reception.
You’re already trying too hard to please. You should have played what you really wanted and damn the consequences. Because here’s what happened. Everyone, from great-grandmother to the littlest tot, begins their opinion of Free Energy like this: “It was alright but . . .” Everyone. Something has gone terribly wrong under the guise of getting it right.
Your pop-loving niece finishes the statement with “. . . it wasn’t pop enough.” Your rocking nephew finishes with “. . . it wasn’t rock enough.” Your boring sister: “. . . it was too weird.” Your less-boring sister: “. . . it wasn’t weird enough.” Your freewheeling uncle: “. . . it wasn’t Seventies enough.” Your conservative aunt: “. . . it was too Seventies.” Great-grandmother: “. . . it was too hard.” Some jaded indie teen in the room: “. . . it was too soft.” This music, you realize, is a Goldilocks scenario.
Free Energy, by producing Love Sign, may have inadvertently created the music that the greatest number of people will find the least offense with. Not even Paul McCartney can quite pull that off. Free Energy’s previous album was produced by LCD Soundsystem’s James Murphy, who once wrote a song called “Get Innocuous!” Free Energy appear to have taken that title as a guiding principle for Love Sign.
What about the goddamn songs?, somebody asks their browser window. The songs are every episode of “That 70’s Show”: they sound like the Seventies and none of them are that bad or that great. They do, however, certainly exist.
Innocuousness lends itself to middle-of-the-road ratings. But it also lends itself to taking off half-points for excessive innocuousness. So: 2 1/2 stars.
Key Tracks: “Electric Fever”, “Hey Tonight”, “Backscratcher”
Artists With Similar Fire: any number of mid-grade Seventies bands with two or less hits
Free Energy Website
Free Energy Facebook
-Reviewed by Alan Black (alanblack13.com)