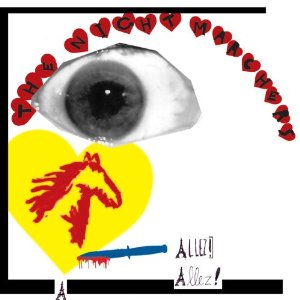 Fire Note Says: The Night Marchers return after a 5 year absence with the rambunctious Allez Allez!
Album Review: Look no further if you want some solid rock n roll that has punk roots, talent at every instrument and a commanding lead vocal that will consistently get you all geared up. The Night Marchers sophomore full length album, Allez Allez, has all of these components covered with the band consisting of ¾ Hot Snakes with John Reis (Rocket From The Crypt, Drive Like Jehu, Sultans), Gar Wood (Beehive and the Barracudas, Tanner) and J Sinclair (Delta 72, Mule, Bardo Pond) accompanied by Thomas Kistos (previously of Montreal rock n roll destructionists, CPC Gangbangs). With this lineup there is not much that The Night Marchers can’t do and they bring a renewed energy here on Allez Allez.
Right from the opening track “Tropical Depression”, the San Diego natives come at you with a confidence that new bands just don’t possess. Everything from the heavy hitting skins to Reis’s familiar vocal style aides the song’s rumble. The quick guitar chord changing that kicks off “All Hits” is instantly likable as Reis lets out a “whoo” before delivering the line “I’m the holy grail of infected toenails!” This beaming attitude is what makes The Night Marchers stand out. 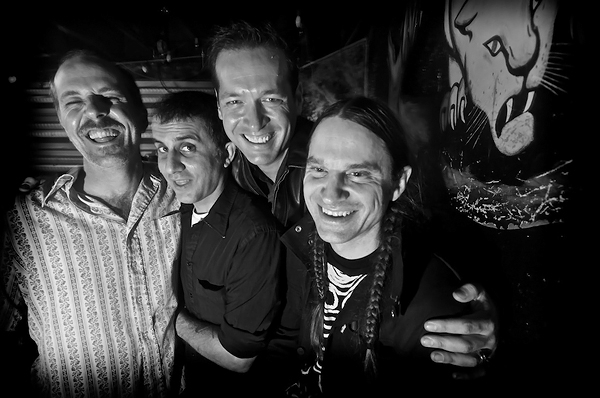 Now you might start thinking what separates this band from the previous acts these guys have been associated with so that The Night Marchers are simply not Hot Snakes 2 or Rocket From Crypt Part III. The answer is in the subtle stylistic differences throughout the record as you can still find all of those previous histories here. You can hear the trombone and saxophone on “Big In Germany” but the song has this very strolling rock quality to it and does not hit you in the face as hard as a Rocket From The Crypt track or like how even some of the punkiest tracks, such as “Loud, Dumb and Mean” still pass the three minute mark as this record has a running time of 44 minutes and is not near as concise as some of the Hot Snakes records. You also get several more edgy ballads like the catchy “Roll On” and slightly poppy “Pain” which seems like newer ground for The Night Marchers.
The bottom line on The Night Marchers is that if you have been a follower of any group these members have been associated with over the years, Allez Allez will stand tall. This record does not consistently have the hooks within the tracks to keep your attention at all times but with repeat listens it will start to sink into your head. John Reis alone has a memorable vocal that once again shines on record and makes Allez Allez a worthy addition to your rock n roll collection and a welcomed return. Let’s hope another five years does not pass before we hear new material from them again!
Key Tracks: “All Hits”, “(Wasting Away In) Javalinaville”, “Roll On”
Artists With Similar Fire: The Hives / Hot Snakes / Rocket From The Crypt
The Night Marchers Facebook
Swami Records
-Reviewed by Christopher Anthony