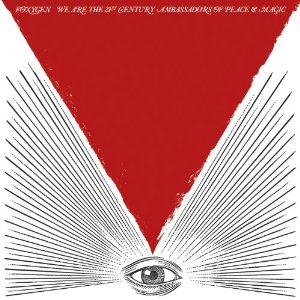 Fire Note Says: I’m gonna dance on a rainbow with the young Steve Winwood.
Album Review: The whole affair opens quite in line with the album title, giving us the tambourine-to-the hip swinger “In the Darkness.” All is mid Sixties to mid-Seventies, all is poetry and feeling. The vocals sway and preen but don’t take things too far, coming up short of self-parody. The singer, Sam France, doesn’t just believe what he’s singing, he’s relatively sincere. He tries on masks and personas not with sophomoric swagger but rather with a certain sweetness. Like a good drag show participant. Helping this tone come across more than anything is Jonathan Rado’s fleetly-fingered keyboard, bringing Seventies white blues up nice and cozy against France’s daisy-chaining.
The second track, “No Destruction,” works a touch too hard for a Lou Reed vibe while making a Lou Reed vibe halfway palatable, unlike much of Lou Reed. The third, “On Blue Mountain,” jives between being a sassy uptempo chanter and a bluesy breakdown and ends up doing a sensational job of it. Number four, “San Francisco,” puts that daisy chain right atop the head of Nico and, as bad as that sounds on paper, it works. 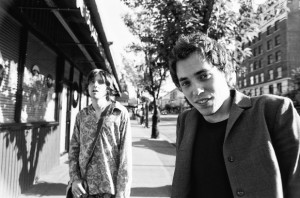 Much of the album’s success is due to the lovely production work, tempering experimentation with established avenues and delivering a well-balanced, cohesive whole. Picture The Big Lebowski’s Dude having a light little dance on the beach with a modern young lady of the flower child persuasion—a bit of gentle sway, a bit of sloppy frugging, a bit of arms-wide-to-the-sky celebration—and you have a fair feel for this album. There’s even a snappy little era-blending track called “Bowling Trophies.”
The last three tracks on this nine-track album are easily the weakest. This includes the album’s title track, which strives too hard for a Stooges flair that it can’t fulfill. Punk cred should have been left off the list of this album’s attempted achievements—but thankfully it’s the only major misstep. Large portions of Foxygen’s work sound like a band opening for Of Montreal. But as for becoming interesting headliners themselves, they’re at least heading in (mostly) the right direction.
Key Tracks: ”In The Darkness”, “On Blue Mountain”, “Shuggie”
Artists With Similar Fire: Of Montreal / The Velvet Underground / everything on the Velvet Goldmine soundtrack
Foxygen Website
Foxygen Facebook
Jagjaguwar Records
-Reviewed by Alan Black (www.alanblack13.com)

1 thought on “Foxygen: We Are The 21st Century Ambassadors Of Peace & Magic [Album Review]”