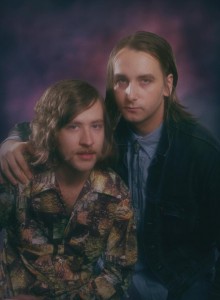 After forming Wampire, Rocky Tinder and Eric Phipps steadily began to make a name for themselves in the same Portland, OR, scene that has produced labelmates STRFKR as well as Unknown Mortal Orchestra. It makes sense, then, that Wampire came to Polyvinyl’s attention when the duo opened for STRFKR at a hometown Portland show and that UMO’s bassist Jacob Portrait produced Wampire’s debut full-length, Curiosity.
First single, “The Hearse” serves as the perfect introduction for those unfamiliar with the band — its opening notes swelling instantly with electronic organs over a driving drum beat. You can hear the track below. By the time bass and vocals kick in, you’re already hooked. Their debut LP, Curiosity, will be released in May on Polyvinyl Records.