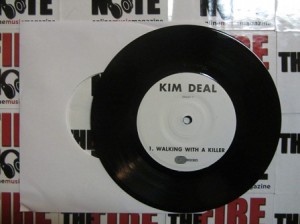 Along with the reuniting Breeders news, this 7-inch release from Kim Deal was a great surprise to kick off 2013. This release is number one of what is supposed to be a continuing series.
What I liked about the surprise release style here is that there was absolutely no expectations of what new Kim Deal music would sound like. Would it be back to The Breeders sound since that is the current mind set, more like the lower-fi creativeness of The Amps or maybe just straight indie rock Pixies style? Well how about something different because that is what we get with both tracks here.
The A-side, “Walking with a Killer”, is more of a laid back post-punk scorcher that extends beyond the 4 minute mark and features the very calm and cool Kim vocal that has very little deviation from tone. The intensity of the song comes from the guitar as it crescendos up and down where it almost goes out of control before falling back in line. The B-side, “Dirty Hessians”, is a propulsive instrumental track that also just passes a 4 minute running time. The song works out on its own but still seems like the perfect base for some intertwined Kim vocals!
This limited edition of 1,000 copies is as plain and simple as it gets. The black wax has a very generic white label and the record is issued in a plain white die-cut sleeve. This 7-inch sold out quickly so I would recommend if you want in on the next one head on over to Kim’s website and sign up for a notification email. Until then you can also snag these tracks digitally so make sure if you are a fan to grab them – you won’t be disappointed.
Kim Deal Website
-Feature by Christopher Anthony