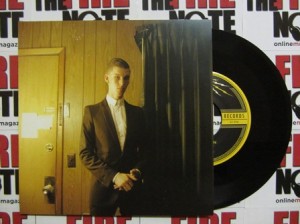 Not sure you know the name yet but Willy Moon is responsible for the song “Yeah Yeah” which was the latest track boosted to extreme exposure by an Apple ad. Well just before all that hype, the New Zealand-London based 23 year old musician, singer and producer released this 7-inch for “Railroad Track” on Third Man Records.
Moon definitely has a knack for creating an initial impact with his tracks as the A-side “Railroad Track” kicks off with a bell toll, rolling thunder and a humming choir before Moon’s vocals officially kicks off the grooving track with the inviting and direct “Well everybody come along with me.” The just over two minute track never lets up from this foot tapping somewhat bluesy vibe as its uniqueness is a welcomed surprise. The B-side here features a faithful cover of Sony Bono’s “Bang Bang” which was both originally made popular by Cher and Nancy Sinatra. Having a male lead vocal on the track works and does not change the intensity of the song.
The packaging here from Third Man is straightforward as the jacket is a fold over so you need a clear plastic cover to ensure your wax is safe. This version is a standard black but TMR made 300 of the coveted yellow/white/black tri-colors so eBay is your friend if you desire one of those. Willy Moon will have a full length out soon and if it follows the strength of this single and “Yeah Yeah” it should be an anticipated listen.