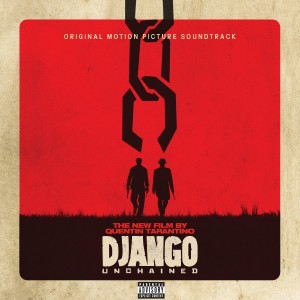 Fire Note Says: Quentin Tarantino gives us something we entirely expected.
Album Review: To begin with, the film: it’s thoroughly contrived and thus boring, especially in the second half. You know how when you’re an hour into a film and you think the set up is halfway decent but things better build from here? And then, well, everything fails to follow through due to the director’s poor choices? Well that’s Quentin Tarantino’s last few films and Django Unchained is no exception. Jamie Foxx is excellent, Christoph Waltz is excellent, Leonardo DiCaprio is excellent. The production design and cinematography are tremendous. The dialogue is, often enough, solid. But the story? Thin, insubstantial. The directing? Far too self-conscious. And the fabled Tarantino violence? Very tired this time around, as it was in Inglourious Basterds. His style is all pitch and no follow-through. And he could use more than a dose of humility. Instead of becoming a B-movie champion, a Scorsese of re-imagined and elevated schlock—as Reservoir Dogs, Pulp Fiction, and Jackie Brown gave us hope he’d become—he’s now a sort of Michael Bay: build a machine of a movie and then deliver empty sensation throughout the second half.
And how’s the music? Soundtrack construction is generally a strength for Tarantino and Django Unchained provides the usual quirky mixtape jumble of styles and tones. Ennio Morricone, Tarantino’s raid-the-archive stand-by, makes a few appearances. Luis Bacalov is the guest of honor this time around, giving the film and soundtrack a solid backbone while simultaneously being completely expected: it’s a Tarantino choice through-and-through. Jim Croce’s feelin’-easy-Seventies “I Got a Name” provides, on the other hand, an unexpected pleasure to the soundtrack and the film. Elisa Toffoli’s “Ancora Qui” is a lovely tune and John Legend provides a great track, “Who Did That to You?” But sandwiched between those two is a sloppy and completely unnecessary mash-up of James Brown, 2pac, and film dialogue. Also unnecessary: Rick Ross’ “100 Black Coffins”—it reeks of marketing the soundtrack to a wider audience and nothing more.
So is the soundtrack good? It’s okay. Is it better than the film? Undoubtedly.
Representative Tracks: “Django” (Luis Bacalov & Rocky Roberts), “The Braying
Mule” (Ennio Morricone), “Who Did That to You?” (John Legend)
Artists With Similar Fire: Every Tarentino soundtrack!
Django Website
Django Facebook
Universal Republic Records
-Reviewed by Alan Black (www.alanblack13.com)