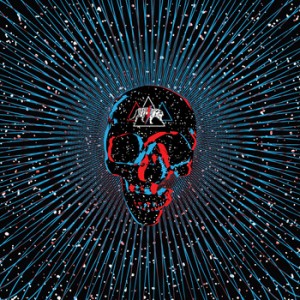 Fire Note Says: Tiger High play aggressive and spacey psychedelic rock with shades of 90s nostalgia.
Album Review: Memphis-based Tiger High’s debut album Catacombs After Party meshes the band’s love for 60s rock and pop with a heavier, more layered sound that gives a nod to more recent neo-psych bands. Dominated by the chiming and chugging guitar heroics of Jake and Toby Vest (who also plays organ), the solid rhythm section of bassist Greg Faison and drummer Greg Roberson (hand-picked by the 60s legend and Love vocalist/songwriter Arthur Lee to put together a touring version of that band) provide a propulsive backbone that makes sure each track has just the right amount of driving catchiness.
The album roars out of the gate (no band-name pun intended) with standout “So Long,” its pounding drums and catchy psych-guitar riff overtop of Jake Vest’s raspy vocal—reminiscent of Silversun Pickups’ Brian Aubert—providing a perfect introduction to the band’s overall sound. The song’s middle-eight breaks the riff apart to just guitar and drums before a short solo leads back to the chorus. Following “So Long” is “Coral Castle,” and once again the guitar riff is the central focus; the track almost sounds like mid-70s Led Zeppelin if they were fronted by Seeds lead singer Sky Saxon instead of Robert Plant. Things settle down a bit for “Where Are Our Arms,” which starts out with lightly strummed acoustic guitar, Flaming Lips-esque electronics and a lead vocal that sounds like it was recorded at the bottom of a swimming pool. The song slowly builds, adding drums and layers of guitar, synth and tambourine, culminating in the chorus: “We have places to be / We follow her majesty / Oh where are we now? / Where are our arms?” One of Catacomb After Party’s best tracks arrives next with “Lightspeed.” Featuring a descending bass line, spacey upper-octave strums and soloing overtop crunchier, lower octave rhythm guitar, and one of the albums most memorable melodies, “Lightspeed” is definitely the highlight of the album’s first half. 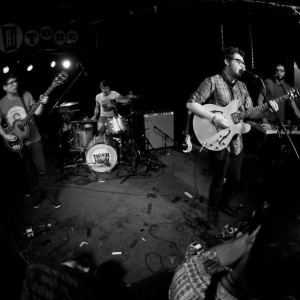 From there, things do go downhill a little bit; “Leave It Alone” tries to be a garage-punk rave up with its fast beat and short running time, but just ends up feeling out of place. “Get The Picture” is better, a mid-tempo anthem that sounds like a hybrid of Clouds Taste Metallic Flaming Lips and the poppier, more accessible sound of classic Oasis—the problem is that it’s pretty derivative and not as interesting as the material that precedes it. The next three tracks reel the band’s sound back in to the 60s: “Be The Indian” and “Ball And Chains” both sound like they could be modern versions of classic garage tracks, while “Cry Crocodile” is a heavy blues-infused rocker that recalls The Black Keys and Wolfmother. The band finally scores again with “No One’s Come To Call,” an organ-heavy track that marries a nicely composed chord progression with a vocal that slides up and down the scale, hinting at the band’s southern roots. Penultimate song “Trouble” is another acoustic-based number with a folky vibe that recalls some of the quieter moments of (fellow Memphians) Big Star’s #1 Record, while the closer “Vibes” is heavy on just that. Heavily influenced by the sitar-heavy sound of the more out-there psych bands of the late 60s, it’s a decent closer that probably could have been trimmed down from its slightly over-long seven minutes.
While Tiger High is definitely indebted to the 60s and early 70s, they never really settle into any one sound, instead drawing from a wide range of artists. While this does occasionally cause missteps, overall the band brings enough energy, creativity, and talent to the table to warrant repeated listenings.
Key Tracks: “So Long”, “Where Are Our Arms”, “Lightspeed”, “No One’s Come To Call”
Artists With Similar Fire: 90s Flaming Lips / Silversun Pickups / Ty Segall
Tiger High Facebook
Trashy Creatures Records
-Reviewed by Simon Workman