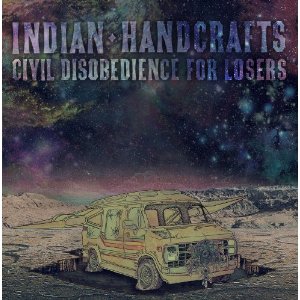 Fire Note Says: Find the nearest dimensional tear and let Indian Handcrafts take you somewhere.
Album Review: Gas up the Firebird, roll down the windows, turn the volume up, push the pedal to the metal, and gear up for the cosmos and beyond because Indian Handcrafts Civil Disobedience For Losers is an album that is a true graphic novel. Spectacular space battles, kick ass karate men, zombie ridden destruction, blood, guts, gore, and worms add even more to the story. The duo of Brandyn James Aikins (drums/vocals) and Daniel Brandon Allen (guitar/vocals) seem to re-explore a decade where “Rime of the Ancient Mariner” was law, future cyborgs hunted humans, and the Sammy Hagar’s “Heavy Metal” could give you another worldly experience – just look at the album art work and tell me if I’m on to something.
Enter the dragon if you dare, as album opener “Bruce Lee” gongs its way into your ears – after that, the adrenaline and intensity goes up to eleven. Like one man in the middle of 10 guys, the drums and guitar thunder in tandem with a leave no one standing mentality. Like the name suggests “Starcraft” takes a bit of a spacey, sludge approach starting out. But then on come the after burners and the song shoots through a high intensity worm hole, until it all comes back around on the heavy guitar and shouts of “Starcraft”. It does come off as repetitive at times, but it is still impressive that a duo can pull some of these things off. 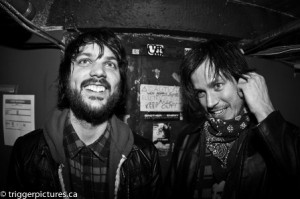 Lurching its way toward the listener, “Zombie’ might actually be a big reference to The Walking Dead which scored some brownie points with me. Lines like “We got an army-of just four-a pocket knife and a crossbow” and “Break through Georgia- slaying ghouls-collect my brother from the roof”, combined with the brutal rolling groove also helps boost my interest. “Terminal Horse” shoots out the speakers with the velocity of a bullet and doesn’t let up for its minute and forty-four duration. The track even has a bit of octave bending antics in a Tom Morello or Jack White vein. “Truck Mouth “carries a very cool shoe gaze vibe that seems to carry its way into the next track “The Jerk”. Its ethereal feel and heavy mindedness almost seem to impose a Tool, if not A Perfect Circle vibe as the dooming heft floats on. Finally, “Lion At the Door” tribal rumble gives way to an onslaught of riff driven fuzz. In the middle of the song I get a sharp Shoreline Dream moment of post rock shoe gazieness, until being dropped back in to stony brutality, and warped screams bring the song to an end.
I’d be lying if I didn’t say that I wasn’t impressed with the duo’s efforts, the guitar trickery, the warped vocals, and impressive intensity that the album has at every turn. But at some points Civil Disobedience For Losers feels like there was so much creativity put into the work that there may have just been a bit too much rinse, wash, and repeat for my liking. If you’re looking for a fun and fast paced record then I recommend giving Indian Handcrafts a listen as this album never slows down.
Key Tracks: ” Bruce Lee”, ”Starcraft”, “The Jerk”
Artists With Similar Fire: Queens of The Stone Age / A Perfect Circle / Clutch
Indian Handcrafts Website
Indian Handcrafts Facebook
Sargent House Records
-Reviewed by Christopher Tahy