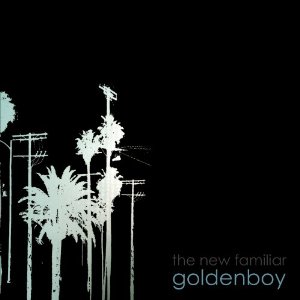 Fire Note Says: The New Familiar is a richly textured cinematic pop record!
Album Review: When you spend a considerable amount of time out on the road with the likes of Elliott Smith, Grandaddy, Neil Finn, The Rentals, Eels, and Bright Eyes, as Goldenboy has, you had better be good! Goldenboy is indeed pretty darn good, and their new album, The New Familiar is one well worth seeking out. Shon Sullivan, who sings, plays guitar, and writes the songs, also recorded the album at his own studio. Part of the magic of this record is not just the sound of a band firing on all cylinders, but the fact that they were able to capture this sound and produce a record this textured on their own.
This is mellow, gorgeous pop music, melancholic and cinematic in scope. At times they sound a bit like what you would imagine Belle and Sebastian sounding like if Jason Lytle replaced Stuart Murdoch. “The Walking Song” takes this dynamic to the extreme, stretching it out to over 6 minutes and lacing it with elements of spacey dream pop as well. “Steal Your Face” chugs along to an uptempo beat and yet still maintains that dreamy feel, atmospheric guitars give it a full texture as well. “Starlight Town” reminds me of a great lost Kinks Village Green era unreleased track. Built on a piano riff, and augmented by lush background vocals, and background synths, it’s the most impressive track on The New Familiar. If you tend to think of an album as a film, as I tend to do, then “Just Say I Love You” acts as the closing credits to The New Familiar. It recalls wide open spaces with its vastness, yet, it remains very intimate at the same time. 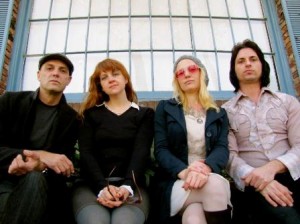 If you enjoy cinematic and lush sounding pop music, then this is the album for you. I recommend listening in a dark room with headphones on, as it really allows you to explore the rich sonic terrain contained within!
Key Tracks: ” Just Say I Love You”, “The Walking Song”, “Starlight Town”
Artists With Similar Fire: Grandaddy / Belle And Sebastian / Damon And Naomi
Goldenboy Website
Goldenboy Facebook
Eenie Meenie Records
-Reviewed by Kevin Poindexter