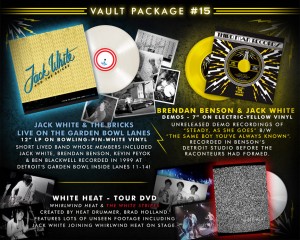 Third Man Records has just released details on Vault Package 15. Looks like another great vinyl collection! You can find Third Man’s description of the vault items below and if you would like this package you will need to become a Platinum Vault Member by January 31st HERE. 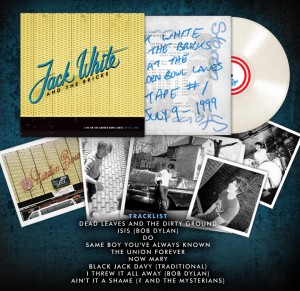 “The LP for this round of the Vault is the first-ever live show by a short-lived band called Jack White and the Bricks. Featuring Jack White on vocals and guitar, Brendan Benson (the Raconteurs) on guitar, Kevin Peyok (the Waxwings, the See-See) on bass and Ben Blackwell (the Dirtbombs) on drums, the band gigged for only a few short months in 1999. Focusing mainly on covers and White-penned tracks that had yet to have been appropriated by his main concern the White Stripes, this live show took place on White’s 24th birthday, July 9th, 1999. Sharing a bill with the Greenhornes, the stage itself was situated on lanes 11-14 (yes, the actual bowling lanes!) of the legendary Garden Bowl in Detroit. While being the longest continually-run bowling establishment in North America, the Garden Bowl, along with the Gold Dollar, was also the de facto home of the then-bustling Detroit garage rock scene.

The final song of the night, a blistering cover of Michigan’s 60’s garage legends ? and the Mysterians “Ain’t It a Shame” is to “a girl who has to go get surgery soon”…a heartfelt dedication Jack sent out to band mate Meg White prior to a tonsillectomy operation. The show was recorded to four-track reel-to-reel in lane ten by an engineer who, although forgotten to time, left his imprint on the recording with a few track cut-outs and slight audio imperfections. These mild flaws notwithstanding, the vocal performance is extremely fierce and the show captures all four musicians at the height of the Detroit garage rock scene playing with unbridled energy.” 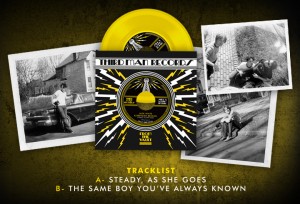 “Drawing from that same time period and the same collaboration-happy times this Vault package features the pre-Raconteurs demo of “Steady, As She Goes” by Jack White and Brendan Benson. Recorded at Benson’s East Grand Studios in his Detroit home in May of 2004, all the signifying parts of the classic song are existent and there, but it would take the incomparable touch of Jack Lawrence and Patrick Keeler to get the song to its classic state that fans know and love from the Raconteurs.

On the flip side is a full-band orchestration of Jack and Brendan nailing “The Same Boy You’ve Always Known” in 1999 a full two years before it would appear on the White Stripes “White Blood Cells” album, and in a much different state. This single serves as a wonderful document of the germinations of what would become the fruitful songwriting partnership between White and Benson in the Raconteurs.” 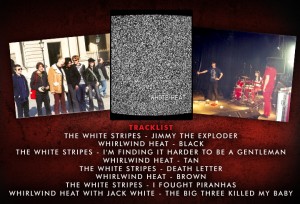 The bonus item this go-round is a behind-the-scenes tour travelog film entitled “White Heat” and packaged in a splendid digital versatile disc. Shot and edited by Brad Holland (Whirlwind Heat) the film follows the Heat and the White Stripes on their European tour during the winter of 2002. Backstage tomfoolery, onstage pranks, the Louvre, brief insight into the malaise that is life on the road…it all culminates in a previously unseen live performance by Whirlwind Heat of “The Big Three Killed My Baby” with Jack White as featured vocalist. This is definitely a side of the White Stripes you have never seen before along with explosive and unseen footage of Whirlwind Heat in thier prime.

Cover Art Revealed for Bullet For My Valentine’s Forthcoming Album